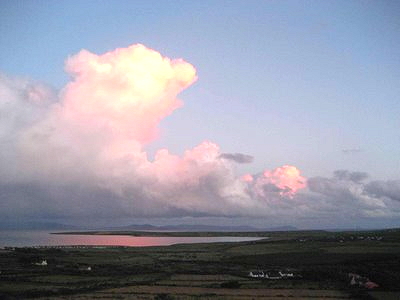 “Sky High”
by Chet Raymo
“As upright primates, the sky is half of our visual field, but we give it only a tiny fraction of our attention. Food, drink, sex and shelter are all to be found close to the ground. What goes on above our heads is mostly irrelevant.

Here in Ireland the sky is much more than half our visual field; we couldn't ignore it if we wanted to. Our cottage is perched on a hill above Dingle Bay, and beyond the garden wall the land slopes to the sea, as if trying to get out of the way, surrendering the view to- air. Insistent, in-your-face, not-to-be-ignored nitrogen, oxygen and water vapor. A big floor-to-ceiling canvas on which wind, water and light create an ever-changing spectacle- gaudy gobs and brushstrokes of color, atmospherics managed by Maxfield Parrish.

It's the water, of course, that makes our skies what they are- the billowing cumulous clouds that pile up over the bay, the dense white blanket that lies on the mountain like sugar frosting or flows down from Mam na Gaoithe (the Windy Pass) like a slow, soft glacier, the rain that buckets against the slates, the rainbows- sometimes two or three a day- all that moisture sucked up into the air out there over the anomalously warm North Atlantic, then pushed in front of our pop-eyed view.

We don't have a television. But last evening we lay in bed and watched rainbows and pink castles come and go. Commercial free.”
- http://blog.sciencemusings.com/
Posted by CoyotePrime at 4:06 PM