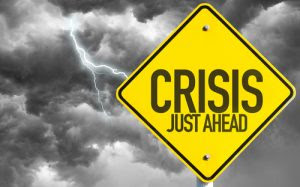 "Inverted and Perverted"
by David Stockman

"The depravity of man is at once the most empirically
verifiable reality but at the same time the most intellectually resisted fact."
–Malcolm Muggeridge,
"Chronicles of Wasted Time: An Autobiography" (1972)

"It’s a legitimate question: Why would anyone in their right mind buy the dip right now? The major stock indices are in nosebleed territory valuation-wise. Bond markets are plagued by negative yields and inverted curves. The White House is occupied by an utterly unpredictable whirling dervish. Is it a measure of the degree to which our monetary central planners have zombified markets that the S&P 500 Index gapped down at the open today but turned positive less than an hour into trading? Do they really believe Trade War talks have turned positive?

Well, whatever happens at a geo-macro level, Jerome Powell’s utter capitulation this summer is also a commitment to Bubble Finance. That’s why there’s any bid left at all. Let’s not kid ourselves: Much of what’s going up has nothing to do with “fundamentals.”

Bubblevision’s still telling us this yield curve inversion is “different,” that’s it’s not cause for worry. Indeed, it is “different.” But it’s “different” this time because it’s much more perilous. The global economy is visibly slowing. It won’t take much of a Wall Street selloff to tip it into recession.

So, the Donald is getting ever more desperate. He knows a stock market crash and a Main Street recession will lead to his thumping defeat in 2020. And the post-White House lodgings won’t be to his liking; much less the orange jumpsuit. The Tweeter-in-Chief running the show amid the statistical inversion of the 2s-to-10s yield curve amounts to a big pile of problems. And the chances anyone anywhere will be able to muster an adequate policy response to an onrushing conflagration recede by the day.

The very idea of paying the sad-sack, debt-entombed governments of socialist Europe for the privilege of lending them money is bad enough. A speculator arbitrage and a flight to positive yield are sure to drag those marginally green figures at the bottom line of that “Sovereign Yields” table closer to red. Indeed, the U.S. Treasury market is virtually the only sizeable pool of positive sovereign yield left on the planet. 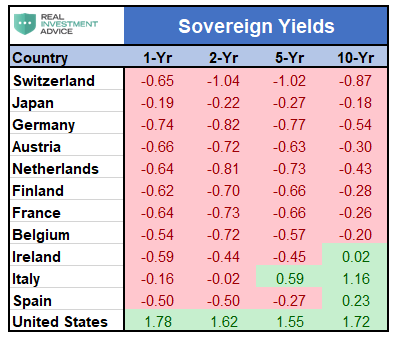 What madness creeps though, as even our quasi-Keynesian friend Mohamed El-Erian noted for Bloomberg: “If negative yields come to the U.S., something's going to break.” Michael Lebowitz and Jack Scott get to the nub: "The concept of negative-yielding debt is totally irrational and incoherent. It contradicts every fundamental rule we learn and attempt to apply in business, finance, and economics. It implies that the future is more certain than the present – that the unknown is more certain than the known!"

It’s most advanced in Europe; and look what it’s done. Germany reported negative GDP growth for the second quarter, its second negative reading in the last four quarters. That’s confirmation the strongest economy in Europe has hit stall speed, at best. Likewise, French GDP growth nearly vanished in the last quarter. And Italy went below the flatline. Overall, eurozone GDP was up by just 0.8% from the second quarter of 2018.
Worse still, the European Central Bank’s massive interest-rate repression has destroyed the eurozone’s banking system. This is what happens when monetary central planners obliterate the yield curve and kill net interest margin in the European financial system… 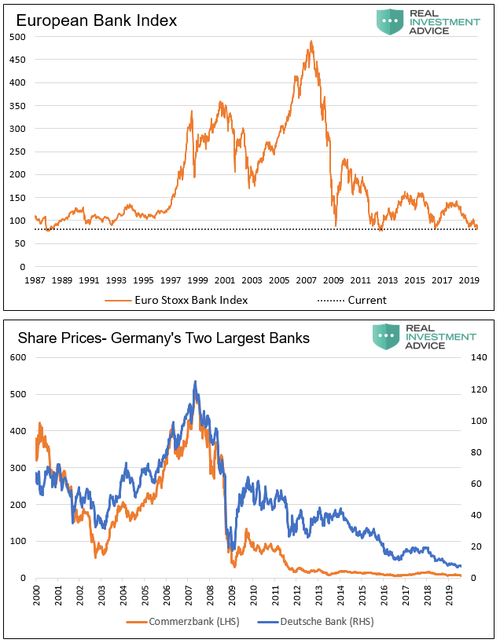 The Euro Stoxx Bank Index is back at 1987 levels. And two giant German banks have lost 97% of their stock value since the turn of the century.

Folks, it’s only a matter of time – and not much at that – before the global economy rolls over into recession. The way things are trending, it’ll probably be triggered by the next spasm in the Donald’s Trade War. But it’s impossible to say for sure. We do know that Wall Street has been disabled by nearly a decade of coddling by monetary central planners. And Bubblevision will never cease inventing new forms of pabulum designed to keep the mullets on the BTFD trip.

It’s a treacherous time. And it’s only getting worse. Be careful out there…"
- https://www.deepstatedeclassified.com/
Posted by CoyotePrime at 2:49 PM