"Is The US Becoming A Third World Nation?"

"Is The US Becoming A Third World Nation?"
by Charles Hugh Smith

"This is a chart of an informal kleptocracy which cloaks itself in the faux finery of democracy and a (rigged) "market" economy. 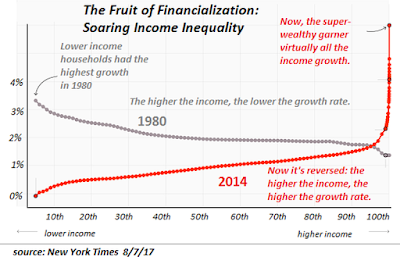 Click image for larger size.
Back in the day, nations that didn't qualify as either developed (First World) or developing (Second World) were by default Third World, impoverished, corrupt and what we now refer to as failed states--governments that were incapable of improving the lives of their people and the machinery of governance, generally as a result of corruption and self-serving elites, i.e. kleptocracies.

Is the U.S. slipping into Third World status? While many scoff at the very question, others citing the rise of homelessness, entrenched pockets of abject poverty and the decaying state of infrastructure might nod "yes."
These are not uniquely Third World problems, they're symptoms of a status quo that's fast losing First World capabilities. What characterizes Third World/Failing States isn't just poverty, crumbling infrastructure and endemic corruption; at a systems level these are the key dynamics in Third World/Failing States:

1. The status quo protects insiders at the expense of everyone else.
2. There is no real accountability; failure has no consequences, bureaucrats are never fired for incompetence, reforms are watered down or neutered by institutional sclerosis.
3. Pay-to-play is the most cost-effective way to influence policy or evade consequences.
4. The status quo is incapable of differentiating between complexity that serves the legitimate purposes of transparency and accountability and complexity that serves no purpose beyond guaranteeing insiders' paper-shuffling jobs. As a consequence, complexity that adds no value chokes the economy and the government.
5. There are two sets of laws: one for insiders and the super-wealthy, and another harsher set for everyone else.
6. The super-wealthy fear nothing because the system functions to serve their interests.
7. The super-wealthy and state insiders control the media's narratives and the machinery of governance to serve their interests. Reforms are in name only; the faces of elected officials change but nothing changes structurally.
8. Insiders, well-paid pundits and the technocrats serving the corporate and state elites believe the status quo is just fine because they're doing fine; they are blind to the soaring inequality, systemic corruption, stupendous waste and the impossibility of real reform.

And lets' not forget #9: the vast majority of the economic gains flow to the elite at the very top of the wealth-power pyramid: is this true in the U.S.? Definitively yes. Just look at the chart above: this is a chart of an informal kleptocracy which cloaks itself in the faux finery of democracy and a (rigged) "market" economy. That's the very definition of a Third World failed state."
- http://charleshughsmith.blogspot.com/
Posted by CoyotePrime at 9:44 AM