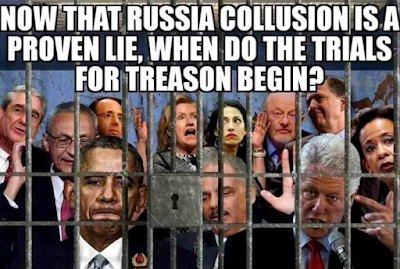 "Fish Fry: The old plantation spiritual comes to mind as the first in a series of DOJ Inspector General’s reports is issued - this one outlining the turpitudes of former FBI Director Jim Comey - while even more fateful inquiries by Barr and Durham grind away in silence and mystery, and one senses that sometime soon the whole hot mess of RussiaGate will land on the doormat of Barack Obama.

Many other (by now) well-known names have been implicated in this fiasco but Mr. Obama has stood aloft from them on a fluffy cloud of his own, enjoying his multimillion book deal, plenty of international travel, and shopping for real estate on Martha’s Vineyard, the elephants’ graveyard of the One Percenters. And yet, something wicked is creeping his way as investigators work up the food chain to discover why and how so many high government officials cooked up a scheme to get rid of the despised winner of the 2016 election.

President Obama, Liberalism’s great bowling trophy, its incarnate virtue signal, is going to get “the business” from the very justice department he sicced on his successor, only now under new management. If you think the Left has gone batshit crazy since the Mueller report flopped, along with the supposed author’s Mr. Magoo-like performance before congress in July, just wait until Mr. Obama is called upon to do some official ‘splainin’ about who exactly authorized the operation to unseat Mr. Trump. I daresay the Left would rather blow up what remains of the Republic than see their retired champion in a witness chair, subjected to the peevings of mere mortal federal attorneys.

And yet, certain remorseless legal machinery has been set in motion now that could send a whole boardroom of former Obama administration higher-ups into disgrace, infamy, and possibly the federal slammer. Think: former CIA Director John Brennan in his future role as ping-pong round-robin manager at the Allenwood, PA, penitentiary; Loretta Lynch paring turnips at Camp Alderson, WV; James Clapper trying to catch a little tan in the ‘yard’ at Lompoc…. Somewhere along the line, someone is going to point a finger at Mr. Obama and those who were around him in the dear dead days of 2016.

There’s no precedent for this, of course, not even the case of ole Tricky Dick Nixon, who never had to take a witness chair in the Watergate matter and received a pardon from his successor, Gerald Ford, which made the whole tiresome business go away pronto. Wouldn’t it be a kind of poetic justice if Mr. Trump had to do the same for Mr. Obama? The New York Times would surely find a way to spin that as “racist.” CNN would declare war on FlyoverLand and send Don Lemon to Kentucky in a Lincoln Navigator with a light-saber to subdue the Ku Klux Klan and the satanic hosts of White Supremacy. Well, you see how easily this country could lose its sh*t.

In the meantime, cries of consternation rise from Right at the DOJ’s demurral to actually indict Mr. Comey on any of the charges listed rather explicitly in the new report. The explanation goes something like this: Comey gave an official FBI memo of his own composition to pal (and attorney) Daniel Richman, and instructed him to leak the contents (though not the memo itself) to a New York Times reporter. The memo involved recollections of a one-to-one meeting with Mr. Trump in which the case of General Flynn came up, with Mr. Trump making the case that there was nothing illegal about the National Security Advisor speaking with the Russian ambassador - since, after all, that is precisely what ambassadors from foreign lands are in Washington to do. I actually wouldn’t be surprised if it turned out that Mr. Comey was wearing a wire during that, and several other, meetings he had with Mr. Trump - before the president grokked that he was being personally set-up for an obstruction-of-justice rap and issued Mr. Comey a pink slip.

In sum, this particular matter amounted to a rinky-dink charge, where Mr. Barr’s prosecutors are concerned, compared to the greater and darker matter of Mr. Comey’s role in defrauding the FISA judges to get warrants to spy on US citizens. That will likely be Mr. Comey’s true Waterloo. So, he greeted this week’s IG report with a smarmy Twitter tweet celebrating his imagined “exoneration.” Imagine instead what his cortisol level will be in the months ahead as he awaits further moves by Messrs Barr, Durham, and IG Horowitz.

In an early riposte to all this bother, hapless MSNBC anchor Lawrence O’Donnell came out with a “bombshell” report that Mr. Trump had used a claque of Russian oligarchs to co-sign some loans in his hotel business - more proof that the President is Putin’s puppet! Alas, like so much other information seeping from the bloated, decomposing carcass of RussiaGate, the report had not been verified before Mr. O’Donnell opened his pie-hole to blab it out on prime-time TV. The President’s attorneys promptly offered to sue Mr. O’Donnell for defamation unless he apologized post haste and renounced the phony report. Which he did. Just another day in hysteria-gripped MediaLand.

As a sidelight, given the content of the IG’s report on Comey, one can easily imagine Judge Emmet Sulilvan having to now throw out the case against General Flynn, which has been fermenting in pre-sentencing limbo for the better part of a year, perhaps awaiting developments like these. If not, Mr. Trump will surely have to pardon the General. It would be real poetic justice to see him hired back to the job he was underhandedly shoved out of."
- https://kunstler.com/
Posted by CoyotePrime at 11:08 AM