"We haven’t seen this sort of seismic activity on the west coast in a very long time.  Last month, two monster earthquakes in southern California were followed by thousands upon thousands of aftershocks, and the shaking still hasn’t stopped. Scientists tell us that the San Andreas fault is “locked and loaded” and that it could potentially “unzip all at once” without any warning at all. But meanwhile, another ominous threat is looming farther north. 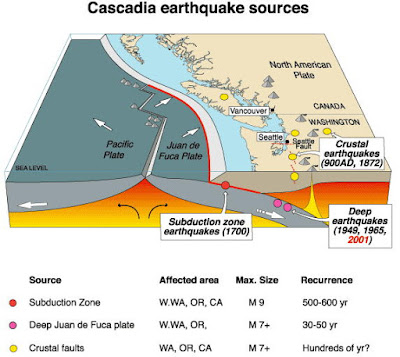 Click image for larger size.
As you will see below, more than 4,500 earthquakes have rattled the Cascadia Subduction Zone over the last two weeks, and that includes a magnitude 6.3 quake that struck off the coast of Oregon on Thursday. The following comes from the official USGS website: "The August 29, 2019, M 6.3 earthquake near the coast of Oregon occurred as the result of strike-slip faulting along the Blanco Fracture Zone, a transform fault marking the boundary between the Pacific Plate to the southwest and the Juan de Fuca Plate to the northeast. Moment tensor solutions show faulting occurred as a result of slip on a steeply dipping fault, either from left-lateral slip on a northeast striking fault or right-lateral slip on a southeast striking fault. Given the moment tensor and orientation of the fracture zone, this event occurred on a steeply dipping, right-lateral, southeast striking fault. At this location, the Juan de Fuca Plate slides past the Pacific Plate at a rate of 49 mm a year along an azimuth of 110 degrees from north.

If this was an isolated event, that would be concerning enough, but this earthquake happened in the midst of a very unusual earthquake swarm: "Did you feel the ground move this week? Not likely, even though a wave of small tremors was spreading under people’s feet in the coastal Pacific Northwest. The Pacific Northwest Seismic Network has detected more than 4,500 tremors over the past two weeks deep beneath the Olympic Peninsula and southern Vancouver Island and from another swarm stretching from Eugene to the Siskiyou Mountains."

Could it be possible that all of this seismic activity is putting additional stress on the “locked” portion of the Cascadia Subduction Zone? According to the director of the Pacific Northwest Seismic Network, this is something that “we don’t know”:

The key question for seismic network director Harold Tobin at the University of Washington (UW) is whether the current slow slip has implications for the feared Big One, a large Cascadia earthquake. “There could be a heightened chance that that would be adding stress to the part of the plate we actually worry about, which is the ‘locked zone’ or the seismogenic zone, for the big earthquake,” Tobin told public radio on Tuesday. “But the fact is the jury is very much out on that. That is a hypothesis, but we don’t know.”

But what we do know is that low level shaking can sometimes lead to a larger event, and that is something that we witnessed in southern California last month. The Cascadia Subduction Zone stretches from northern California all the way up to Vancouver Island, and scientists assure us that it is only a matter of time before it produces another monster earthquake. And when that happens, we will almost certainly also see a colossal tsunami which will completely wipe out communities all along the west coast. In fact, the head of FEMA’s Region X once told the New Yorker that “everything west of Interstate 5 will be toast” when this sort of an event finally strikes: "If the entire zone gives way at once, an event that seismologists call a full-margin rupture, the magnitude will be somewhere between 8.7 and 9.2. That’s the very big one. By the time the shaking has ceased and the tsunami has receded, the region will be unrecognizable. Kenneth Murphy, who directs FEMA’s Region X, the division responsible for Oregon, Washington, Idaho, and Alaska, says, “Our operating assumption is that everything west of Interstate 5 will be toast.”

In the Pacific Northwest, everything west of Interstate 5 covers some hundred and forty thousand square miles, including Seattle, Tacoma, Portland, Eugene, Salem (the capital city of Oregon), Olympia (the capital of Washington), and some seven million people."

We are talking about a tsunami that will be many magnitudes worse than the tsunami that devastated much of the Japanese coastline back in 2011. According to Oregon State University paleoseismologist Chris Goldfinger, the Cascadia Subduction Zone has the potential of producing a giant wall of water up to 100 feet high that would devastate everything in sight: "The tsunami would bring water 20 to 80 – maybe even 100 – feet higher than today’s high tides. Most of the structures that have survived the killer quake but built too low will be smashed into by a devastating wall of water. And the next surge could be even higher, and the one after that higher still.

It won’t just be the water causing destruction, but everything it picks up. Goldfinger described what would happen all around and on the spit of land where CBN News interviewed him in the middle of Newport, Oregon’s Yaquina Bay, a few hundred yards from the Pacific. “Then suddenly you’ve got a bay full of fishing boats, refrigerators, cars and everything else,” Goldfinger explained. “And it’s like a glacier of debris that’s just kind of sloshing back and forth.”

This is why many of us are so concerned about all of the shaking that we are seeing in the Northwest right now. The sort of disaster that I just described could literally happen at any time. In addition, let us not forget that there are many extremely dangerous volcanoes in the Northwest that could reawaken suddenly. I am particularly concerned about Mt. Rainier, and this is something that I have warned about extensively.

Some of our most important cities are essentially built on a “time bomb” that could go off at any moment. And scientists tell us that it is absolutely certain that someday disaster will strike. Let us hope that day can be put off for as long as possible, but without a doubt our time is running out."
- http://endoftheamericandream.com/
○
Ahh, yes, I know, Good Citizen, the daily dose of uplifting and inspiring news and information on "Running 'Cause I Can't Fly"... I wish it were different, that the world was a different, better place, but it's not, and is what it is, resulting in our daily masochism tango of unpleasantries here, something like this maybe...

To paraphrase, "Don't torture yourself, Good Citizen, that's my job..."

“We work in the dark. We do what we can to battle with the evil that would otherwise destroy us. But, a man’s fate is defined as not a choice but a calling. Yet sometimes the weight of this burden causes us to falter, breaching the fragile fortress of our mind, allowing the monsters without to turn within and we are left alone, staring into the abyss… into the laughing face of madness.”
- “Fox Mulder”, “The X-Files”

Thanks for stopping by!
Posted by CoyotePrime at 11:32 AM