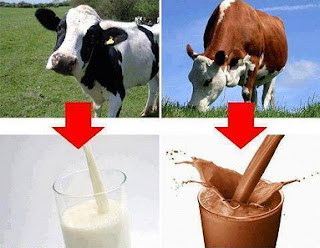 "Seven percent of adults in America think chocolate milk comes from brown cows, according to a new survey from the Innovation Center of U.S. Dairy. Statistically, that's 16.4 million people. U.S. Dairy’s Innovation Center surveyed more than 1,000 adults over the age of 18 and found that seven percent of respondents thought that brown cows make chocolate milk. An additional 48 percent of respondents did not know that chocolate milk is made of milk mixed with cocoa butter and sugar. The survey found only 5% of people don’t drink milk at all, and 95% have a form of cheese in their fridge. Additionally, 25% said they have visited the grocery story before 6 a.m. to buy milk, so while some Americans may not know where their milk comes from, they know where to get it.

The survey has attracted its fair share of snarky critics. “Um, guys, it comes from cows – and not just the brown kind,” wrote Elisabeth Sherman of "Food & Wine." Snarky critics aside, agricultural experts say the survey’s results show a growing trend where Americans are “agriculturally illiterate,” meaning they do not know the process of how food goes from the farm to the kitchen table or how other food items are made.

A 1990s study commissioned by the Department of Agriculture found that almost 1 in 5 adults did not know that most hamburgers are made from beef. That study also showed that Americans did not know the type of food animals eat or the size of farms in the U.S.

The problem of food illiteracy is not just isolated to adults. In one study from 2011, researchers found that more than half of the fourth, fifth, and sixth-grade students they interviewed did not know pickles were cucumbers or that vegetables such as onions came from plants.

Studies, however, say this is not representative of all of Americans. People who live in agricultural areas, as well as people with higher incomes and education levels, tend to know more about the source of food, according to the Washington Post.”
- http://www.breitbart.com/

Posted by CoyotePrime at 1:30 PM