"The Beautiful Death of the American Workingman" 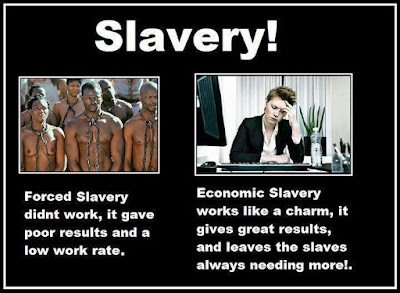 "The Beautiful Death of the American Workingman"
by David Stockman

"Raise your glass to the hard working people,
Let’s drink to the uncounted heads.
Let’s think of the wavering millions
Who need leaders but get gamblers instead."

"Oh, boy. You hate to see it… “Central banks’ negative interest rates were supposed to increase spending, stop deflation and stimulate the economy. They may have done the exact opposite.” That’s not the point, of course. The point is that’s from Bloomberg’s official Twitter account – you know “@business.” So, the mainstream is finally getting the drift:

"According to research from the University of Bath, central banks charging commercial banks to hold excess cash reserves have actually decreased lending. That’s because the additional costs reduce banks’ profit margins, leading to a drop in loan growth. “This is a good example of unintended consequences,” said Dr. Ru Xie of the university’s School of Management, one of the study’s authors. “Negative interest rate policy has backfired, particularly in an environment where banks are already struggling with profitability.”

If you’ve been around here long, you know that excessive, interminable easy money is the root of the present malaise. Here’s the graphic Bloomberg used today to illustrate what the Federal Reserve’s acolytes have done at a purely technical level: 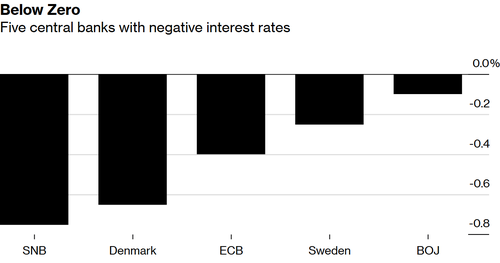 Of course, we’ve been pointing out the holes in the neo-Keynesian narrative for quite a while now. Let’s consider some more lies, damned lies, and statistics…

Bubblevision, perpetuating our monetary central planners’ line, was just aroused by July’s “gangbusters” 0.7% month-over-month increase in retail sales. One of those talking heads, kicking it up yet another notch, said the U.S. consumer is the “New Committee to Save the World.” The allusion is to a 1999 Time magazine cover that proclaimed Alan Greenspan “chair” of said “committee,” with Clinton-era Treasury Secretary Bob Rubin and his deputy Larry Summers as second and third legs.

Even The Wall Street Journal – once so serious – has joined the circus. "U.S. Shoppers Splurge in Face of Global Headwinds", they say. Look, there’s nothing in the July retail sales figures – or those for the past year-plus – to suggest any sort of acceleration from the deeply subpar growth rate of 1.16% per year since the pre-Global Financial Crisis/Great Recession peak in mid-2007.

Now, let me tell you the rest of the story… The U.S. consumer is buried in $15.6 trillion of debt. They’ve experienced punk real wage growth. And, once again, they’re not remotely prepared for the job loss and income decline that’ll happen when the consequences of Wall Street’s next crash fall, once more, on Main Street.

Let’s filter out the monthly noise and adjust nominal figures for inflation. On a year-over-year basis and accounting for the consumer price index, the real gain in retail sales in July was 1.6%. And that’s well below the 2.2% average since July 2014.

A logical headline would read, “Retail sales continue to slow from tepid five-year trend.” Here’s why I say “tepid”: During the final five years of the 119-month expansion of the 1990s, the average real growth rate was 3.3%. That’s 50% “hotter.” That 3.3% rate actually prevailed over that entire dot-com driven cycle that ended in the late ’90s. We’ve seen 1.16% per year from mid-summer 2007 through July 2019. The trend rate for real retail sales growth has plummeted by two-thirds compared to the prior cycle’s trend. In that light, “tepid” seems generous.” 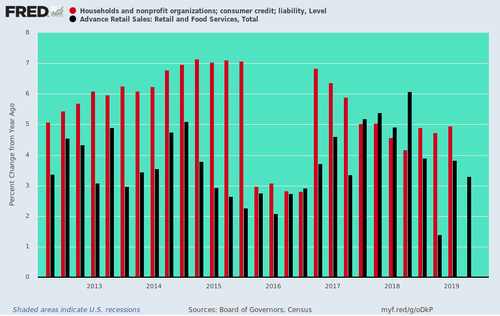 The tall bars are for borrowing. The short bars are for spending. For want of doubt, during the last six years of the present “recovery,” consumer debt (excluding mortgages) has increased at a 5.5% annual rate. Nominal sales have grown by 3.6% per year.

That 3.8% gain in nominal retail sales posted for July 2019 corresponds with a 5% increase in consumer debt. The problem with debt, of course, is that it accumulates on balance sheets over time. And spending growth that depends upon endless debt growth on the margin is not sustainable.

Consumer debt outstanding of $2.6 trillion in the fourth quarter of 2007 amounted to 40% of household wage and salary income. As of the first quarter of 2019, it’s up to $4.05 trillion; that’s 43.6% of income. The U.S. consumer is “healthy” only if you ignore the balance sheet and 30 years of rising leverage. Even the massive wipe-out of mortgage debt during the subprime meltdown didn’t reverse the trend.

We’ve reached Peak Debt. And, at this point, it doesn’t matter whether the Fed cuts rates by another 25 basis points or 75 basis points. Most household balance sheets are just plain tapped out. The real issue is current wage and salary flow versus the accumulated stock of balance sheet debt. The latter has increased by nearly six times since June 1987. That’s an annualized rate of 5.6%.

During the past five years – during the top of a business cycle – nominal incomes have grown by just 4.7% per year. In today’s globally deflationary world, amid a deeply impaired U.S. economy, there’s not a snowball’s chance in the hot place the average American can make those ends meet. That healthy American consumer? “The New Committee to Save the World”? Easy money has reduced it to a pack of used-up debt mules."
- deepstatedeclassified.com
Posted by CoyotePrime at 3:12 PM