"The Fantasy Of Central Bank 'Growth' Is Finally Imploding" 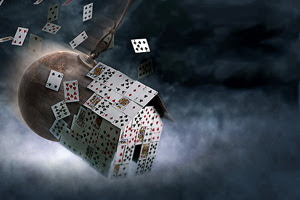 "It was such a wonderful fantasy: just give a handful of bankers, financiers and corporations trillions of dollars at near-zero rates of interest, and this flood of credit and cash into the apex of the wealth-power pyramid would magically generate a new round of investments in productivity-improving infrastructure and equipment, which would trickle down to the masses in the form of higher wages, enabling the masses to borrow and spend more on consumption, powering the Nirvana of modern economics: a self-sustaining, self-reinforcing expansion of growth.

But alas, there is no self-sustaining, self-reinforcing expansion of growth; there are only massive, increasingly fragile asset bubbles, stagnant wages and a New Gilded Age as the handful of bankers, financiers and corporations that were handed unlimited nearly free money enriched themselves at the expense of everyone else. Central banks' near-zero interest rates and trillions in new credit destroyed discipline and price discovery, the bedrock of any economy, capitalist or socialist.

When credit is nearly free to borrow in unlimited quantities, there's no need for discipline, and so a year of university costs $50,000 instead of $10,000, houses that should cost $200,000 now cost $1 million and a bridge that should have cost $100 million costs $500 million. Nobody can afford anything any more because the answer in the era of central bank "growth" is: just borrow more, it won't cost you much because interest rates are so low.

And with capital (i.e. saved earnings) getting essentially zero yield thanks to central bank ZIRP and NIRP (zero or negative interest rate policies), then all the credit has poured into speculative assets, inflating unprecedented asset bubbles that will destroy much of the financial system when they finally pop, as all asset bubbles eventually do.

Nobody knows what the price of anything is in the funny-money era of central banks. And since capital earns next to nothing, the only way to earn a return is join the mad frenzy chasing risk assets ever higher, with the plan being to sell at the top to a greater fool, a strategy few manage as it requires selling into a rally that seems destined to climb to the stars.

Having destroyed discipline - why scrimp and save when you can always borrow to buy or invest?-central banks have no way out of the corner they've painted us into. If they "normalize" interest rates to historical averages (3% above real-world inflation), then all the zombie companies and households that are surviving only because rates are near-zero will go bankrupt, wiping out the "wealth" of all the loans that can no longer be paid.

"Normalized" rates would also bring down the global housing bubble, an implosion that would trigger trillions in losses, reversing the vaunted wealth effect into a realization that we're all getting poorer, not richer, and collapsing the risky mountain of mortgage debt that's been piled on absurdly overvalued properties globally.

But the trickery failed, and all we have is $200,000 houses that cost $1 million, a year in college that costs $50,000 instead of $10,000, and so on.Having destroyed discipline and price discovery, central banks attempted to replace reality with fantasy, and now the absurd fantasy is imploding. The financial system and the real-world economy have both been destabilized by this fantasy, and now both are fragile in ways few understand.

The only "policies" central banks have is to issue more credit at negative interest rates, i.e. doing more of what's failed spectacularly, until the entire rickety travesty of a mockery of a sham collapses. 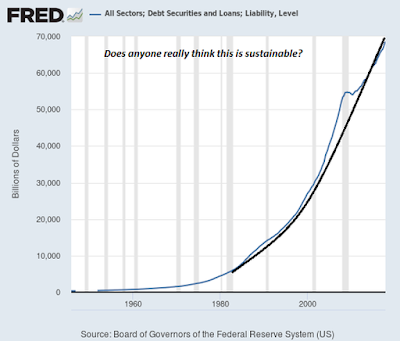 That collapse is currently underway in slow motion, but given the increasing instability of asset bubbles, it could accelerate at any time."
- http://charleshughsmith.blogspot.com/
○
Related:
"That A Member Of The Elite Like Bill Dudley
Could Open This Can Of Worms Is Quite Staggering"

"A ‘Lehman-like’ Market Disaster Could
Happen This Week, Analyst Warns"
Posted by CoyotePrime at 7:16 AM