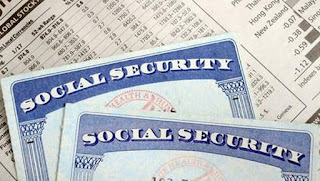 "With only 15 years until social security runs out of money, the solution to this failure is being ignored. When the benefits do get cut, they will drop by 25% around 2034 when there are too many people using the government Ponzi scheme and not enough paying into it, or taxes will be increased.

While writing for Market Watch Brent Arends said this is “the wall” Americans should be concerned about. It’s another, much bigger wall than the one under debate at the Southern border. One that few people are talking about. According to the Federal Reserve’s data, at most one-quarter of people who are currently nearing retirement are going to be able to shrug off any cuts at all in Social Security. Actually, it’s probably considerably less than one quarter.  The rest are going to be in some real financial trouble. Most have no passive income and next to nothing in private retirement plans. Far too many have hung their future on a Ponzi scheme.

The Fed looked at the balance sheets of those currently in their 50s who are nearing retirement. For the middle 50% of income earners, Social Security accounts for somewhere between 47% and 64% of their total retirement wealth. For those in the bottom 25%, it’s nearly all of it. They hold, on average, just $28,000 in private retirement plans. Even the figures at the top are not nearly as good as one would think.The top 25% of earners might look all right, but they are “averaged” in the Fed data, so they include billionaires as well.

No one knows if the government will demand higher taxes (more income theft) so the workers can pay for the Ponzi scheme, or if massive cuts to the program will be made. Unfortunately, no one is talking about the one solution that won’t cost anyone anything they don’t want to pay.  A completely voluntary system not run on force and theft: privatizing social security.

Social Security now has a $32 trillion shortfall.  Imagine being taxed enough (stolen from) to cover that! Not many want a solution because a free market solution would actually solve the problem proving the government’s incompetence and push it further toward being obsolete."
- https://www.zerohedge.com/
○ 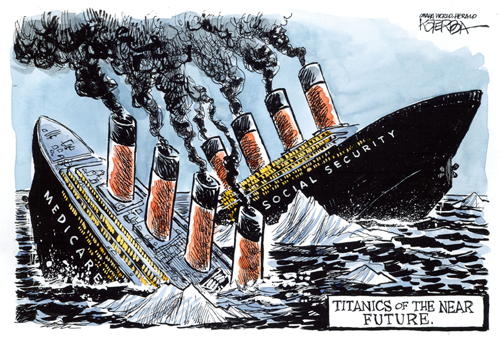 “Sometimes I worry that if I ever can retire and do get Social Security payments, they’ll be a lot less than what I’ve been promised,” I said to my CPA, Louie the Number Cruncher.

“There is some reason to worry, Tommy. According to the Social Security trustees’ latest report, the two trust funds that support the program will run out of reserves in 2035. If that happens, beneficiaries like you will get only 80% of the benefits they’re owed.”

“But I thought Social Security was an insurance program, not a typical government program!”

“Well, Tommy, when FDR signed it into law in 1936, it was considered an insurance program. Workers contributed money to it through income taxes. When they retired, they drew money out.”

“So how can the government arbitrarily cut my benefits?”

“The Supreme Court ruled long ago that policymakers could change Social Security’s benefit formula to reflect shifting conditions. They can cut benefits anytime, and they’ve done so many times.”

“But that’s not fair! I’ve been self-employed for a long time, and I know I’ve paid big money into Social Security every year.”

“But Social Security has run surpluses for years! Surely there’s some huge pile of dough that the government can tap when I retire.”

“The Social Security trustees do report a nearly $3 trillion surplus. But as surpluses have rolled in, the government has used the money to purchase special Treasury bonds, then used that money to fund other programs.”

“The government borrows from itself?”

“No, Tommy -the government borrows from you! Look: In 2035, reports The Motley Fool, baby boomers will have mostly retired, with only 2.2 workers paying into the system to fund each beneficiary. To cover the shortfall, the government will need to cash in those bonds. Guess where it’ll get the money to pay off the bonds.”

“Correct, Tommy. The government will need to cut benefits or raise taxes -and will likely do both. As the trustees say, benefits would have to be cut in 2036 to 80% of what’s promised unless taxes are increased.”

“I read that since 1936, Congress has raised Social Security taxes more than 40 times.”

“Correct again, Tommy. The trustees say a tax increase of 4% -half paid by employers, half by employees -would stave off the shortfall. Others are floating ideas to expand the Social Security program.”

“Tommy, the sooner our Social Security challenges are addressed, the better off the program will be. People are living longer. Many retirees rely on Social Security to pay their bills. It’s time for Congress to get cracking.”

“Well, Louie, knowing Congress, I’m not holding my breath. But I think I’ll add some names to my Christmas list - the 2.2 workers who’ll be funding my benefits when I retire!”
- https://www.cagle.com/
Posted by CoyotePrime at 1:19 PM