Walking The Walk: "The Surprising Answer Andrew Luck Gave When He Was Asked What’s Next" 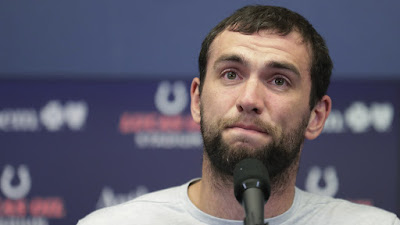 
"Best-selling sportswriter John Feinstein, over his 40-year career, has asked countless athletes the same question: What’re you gonna do when you’re done? Typical answers: coach, talk sports on TV or radio, scout, etc. But Andrew Luck’s answer was anything but typical. In fact, Feinstein, in a piece for the Washington Post, said he’d never heard an answer like Luck’s before. Or since.

That was back in 2018, long before Luck announced his retirement on Saturday at the age of just 29, blaming a lingering leg problem as the breaking point after a career marred by injuries. “For the last four years or so, I’ve been in this cycle of injury, pain, rehab, injury, pain, rehab - and it’s been unceasing, unrelenting, both in-season and offseason,” he said after a preseason game over the weekend. “I felt stuck in it, and the only way I see out is to no longer play football. It’s taken my joy of this game away.”

Luck was booed walking off the field by fans who saw their hopes of a 2019-20 playoff run disappear. Feinstein, like Luck’s peers, was much more supportive. “It’s no mere coincidence that no active NFL player has criticized or questioned his decision,” Feinstein wrote. “Those who do don’t understand how painful it is to play football at the highest level. I’m not talking about injuries, I’m talking about just playing. If you have ever stood on an NFL sideline and watched the way huge men hit one another, it is amazing that anyone ever gets up.”

As for a potential gig in education, Feinstein said, “I suspect, if he decides to teach high-school history, he’ll be great at it.” Luck was set to earn $60 million over the next three years. The average teacher pulls in about $60,000 a year."
- https://www.marketwatch.com/
○

"The crown and glory of life is character. It is the noblest possession of a man, constituting a rank in itself, and an estate in the general good-will; dignifying every station, and exalting every position in society. It exercises a greater power than wealth, and secures all the honor without the jealousies of fame. It carries with it an influence which always tell; for it is the result of proved honor, rectitude, and consistency – qualities which, perhaps more than any other, command the general confidence and respect of mankind.
- Samuel Smiles

The big question is...

Andrew Luck walks the walk, what a rarity...
Posted by CoyotePrime at 1:32 PM