"It is singularity which often makes the worst part
of our suffering, as it always does of our conduct."
– Jane Austen, "Persuasion" (1817)

"As much as we think we know what happened with UkraineGate, this “whistleblower,” and the politics of impeachment, a completely different set of facts could – sooner than anyone thinks – render it all moot.

• The central banks of the world are utterly lost and at a dead-end.

• At the top of the longest business cycle expansion in history, the federal deficit has already crossed the $1 trillion mark, with a recessionary surge of red ink on the immediate horizon.

• And the three leading Democratic presidential candidates agree that the four most important issues facing the country are a lack of universal health care, income inequality, the threat of climate change, and the prevalence of mass shootings.

As to the latter, the most recent embodiment of the JFK fetish, Beto O’Rourke, has left nothing to the imagination: “We’re going to take your AR-15, your AK-47. We’re not going to allow it to be used against our fellow Americans anymore.” I have no brief for these kinds of lethal weapons, either.

And the fact is, what Imperial Washington is coming for is not your guns. What it is coming for is your wealth, your economic prospects, and your personal freedom. Unless and until there’s a thorough house-cleaning at the Federal Reserve as well as a repudiation of Keynesian central banking, the prospects for taming the Leviathan on the Potomac, right-sizing Wall Street, rebuilding Main Street, and preserving individual liberty are frightfully slim.

The old party of fiscal rectitude and sound money is entirely AWOL. Outside of Rand Paul in the Senate and a few libertarians in the House of Representatives, it’s clueless about the Fed’s massive usurpation of power and the threat it poses to both capitalist prosperity and democratic governance. And those first three “most important issues facing the country” tell you everything you need to know about modern AOC-and-MMT-style Democrats.

Our monetary central planners have turned both ends of the Acela Corridor into hotbeds of “free lunch” economics. Wall Street speculates like never before, convinced that risk and market crashes have been abolished via easy money. And Imperial Washington borrows like there’s no tomorrow, emboldened because the Eccles Building has made the carry cost of Uncle Sam’s $22.4 trillion debt dirt cheap. Indeed, the Duopoly has been fiscally euthanized by the Fed.

Even if more QE can be avoided, the Fed will have permanently monetized $3.5 trillion of public debt. Given that Uncle Sam’s paper trades in global bond markets, the real number is $22 trillion. That’s the real amount of debt and other securities that’ve been monetized by the collective central banks of the world over the last quarter century. 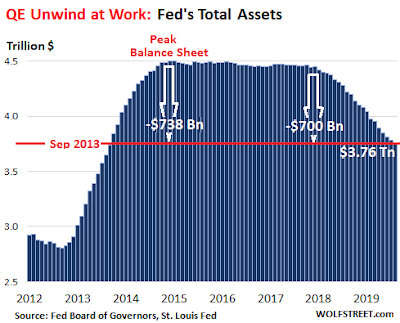 This $22 trillion of central bank demand for government debt and other securities was not on the economic up and up. That’s because honest government debt purchases by private investors require either new savings from current income or the sale of another security to generate the proceeds needed to buy the bonds. In either case, there’s an economic trade-off reflected in the supply and demand equation. And it should include an increase in interest rates sufficient to induce new savings or the swapping out of existing securities.

That’s not how it is anymore in this era of “something for nothing” central banking. When that $22 trillion of bonds and other securities were purchased by the central banks, not a dime of real money savings or proceeds of an offsetting securities sale were transferred to the accounts of Wall Street dealers who sold the bonds to the Fed and other central banks.

The payment was simply a snatched-from-thin-air digital credit. That’s a $22 trillion economic mulligan that would make even the notorious cheating duffer in the Oval Office green with envy. Ironically enough, that $22 trillion economic mulligan is why the Donald ended up, against all odds, at the top of the heap during the GOP primaries back in 2016.

By then, the Fed and other central banks had so thoroughly obliterated the fiscal issue that a complete political novice who fancied himself the King of Debt was able to snatch the GOP nomination. And now he’s made a complete mockery of any remaining pretense of rectitude, fiscal or otherwise. When the recession comes, though, the Donald will go full Great Disruptor. And that could spell “comeuppance” for monetary central planners, here and everywhere."
- http://deepstatedeclassified.com/
Posted by CoyotePrime at 4:27 PM