Chet Raymo, “Into The Night” 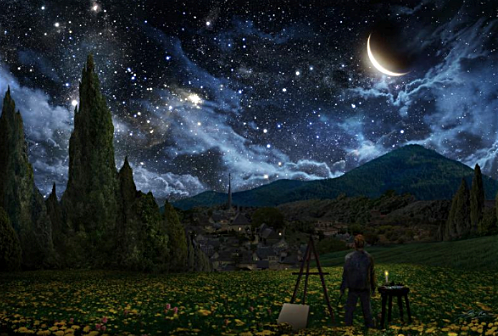 “Into The Night”
by Chet Raymo

“I first became intimate with the night sky on the sleeping porch of my grandmother's house on Ninth Street in Chattanooga, Tennessee, during the early 1940s. A screened sleeping porch might be found attached to any southern home of a certain vintage and substance, usually on the second story at the back. On sultry summer nights you could move a cot or daybed onto the porch and take advantage of whatever breezes stirred the air. I slept there when I visited because it was the only place to find a spare bed. I was usually alone in that big spooky space, with only a thin wire mesh separating me from the many mysteries of the night.

Far off in the house I could hear the muffled voice of the big Stromberg-Carlson radio in the parlor, where grown-ups listened to news of the war or the boogie-woogie tunes of the Hit Parade. Outside was another kind of music, nearer, louder, pressing against the screen, which seemed to come from everywhere and nowhere, a million scratchy fiddles, out-of-key woodwinds, discordant timpani. These were the cicadas, crickets and tree frogs of the southern summer night, but to me at that time they were the sounds of the night itself, as if darkness had an audible element.

Some nights the distant horizon would be lit with a silent, winking illumination called "heat lightnin'." And closer, against the dark grass of the badminton court, the scintillations of fireflies- "lightnin' bugs"- splashed into brightness.

The constellations of fireflies were answered in the sky by stars, which on those evenings when the city's lights were blacked out for air-raid drills, multiplied alarmingly. I would lie in my cot, eyes glued to the spangled darkness, waiting to hear the drone of enemy aircraft or see the flash of ack-ack. No aircraft appeared, no ack-ack tracers pierced the night, but soon the stars took on their own fierce reality, like vast squadrons of alien rocket ships moving against the inky dark of Flash Gordon space.

In time I came to recognize patterns, although I did not yet know their names: the Scorpion creeping westward, dragging its stinger along the horizon; the teapot of Sagittarius afloat in the white river of the Milky Way; Vega at the zenith; the kite of Cygnus. As the hours passed, the Big Dipper clocked around the Pole. And sometimes, in late summer, I would wake in the predawn hour to find Orion sneaking into the eastern sky, pursuing the teacup of the Pleiades.

One memorable Christmas of my childhood, my father received a star book as a gift: “A Primer for Star-Gazers” by Henry Neely. As he used the book to learn the stars and constellations, he included me in his activities. The book was Santa's gift to him. The night sky was his gift to me.

That book, now long out of print, is still in my possession. A glance takes me back half a century to evenings on the badminton court in the back yard of our own new home in the Chattanooga suburbs, gazing upwards with my father to a drapery of brilliant stars flung across the gap between tall dark pines. He told me stories of the constellations as he learned them. Of Orion and the Scorpion. Of the lovers Andromeda and Perseus, and the monster Cetus. Of the wood nymph Callisto and her son Arcas, placed by Zeus in the heavens as the Big and Little Bears. No child ever had a better storybook than the everchanging page of night above our badminton court. My father also taught me the names of stars: Sirius, Arcturus, Polaris, Betelgeuse, and other, stranger names, Zubenelgenubi and Zubeneschamali, the claws of the Scorpion. The words on his tongue were like incantations that opened the enchanted cave of night.

He was a man of insatiable curiosity. His stories of the stars were more than "connect the dots." He wove into his lessons what he knew of history, science, poetry and myth. And, of course, religion. For my father, the stars were infused with unfathomable mystery, their contemplation a sort of prayer.

That Christmas book of long ago was a satisfactory guide to star lore, but as I look at it today I see that it conveyed little of the intimacy I felt as I stood with my father under the bright canopy of stars. Nor do any of the other more recent star guides that I have seen quite capture the feeling I had as a child of standing at the door of an enchanted universe, speaking incantations. What made the childhood experience so memorable was a total immersion in the mystery of the night- the singing of cicadas, the whisper of the wind in the pines, and, of course, my father's storehouse of knowledge with which he embellished the stars. He taught me what to see; he also taught me what to imagine.”
- http://www.sciencemusings.com/
Posted by CoyotePrime at 2:18 PM

Email ThisBlogThis!Share to TwitterShare to FacebookShare to Pinterest
Labels: “Into The Night”, Chet Raymo