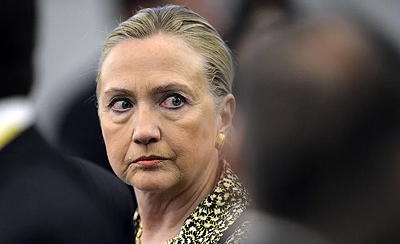 The stare of death...
"Enter, the Dragon"
by Jim Kunstler

"You’d think Hillary Clinton might come up with a better zinger than “Russian asset” when she flew out of her volcano on leathery wings Friday and tried to jam her blunted beak through Tulsi Gabbard’s heart. Much speculation has been brewing in the Webiverse that the Flying Reptile of Chappaqua might seek an opening to join the Democratic Party 2020 free-for-all. Wasn’t “Russian asset” the big McGuffin in the Mueller Report - the tantalizing and elusive triggering device that added up to nothing - and aren’t most people over twelve years old onto that con by now?

It’s not like Tulsi G was leading the pack, with two cable news networks and the nation’s leading newspapers ignoring her existence. Tulsi must have been wearing her Kevlar flak vest because she easily fended off the aerial attack and fired back at the squawking beast with a blast of napalm:

“Great! Thank you @HillaryClinton. You, the queen of warmongers, embodiment of corruption, and personification of the rot that has sickened the Democratic Party for so long, have finally come out from behind the curtain. From the day I announced my candidacy, there has been a concerted campaign to destroy my reputation. We wondered who was behind it and why. Now we know - it was always you, through your proxies….”

Ouch! The skirmish does raise the question, though: is the Democratic Party so sick and rotted that it would resort to entertaining Hillary Clinton as the 2020 nominee? Fer sure, I’d say. The party has been on suicide watch since the Mueller Report blew up in its face. At this point, it’s choking to death on its current leaders in the race. Apart from his incessant hapless blundering on the campaign trail, Joe Biden will never survive assisting his son Hunter’s grifting adventures in foreign lands. It’s just too cut-and-dried and in-your-face. The kid scammed millions out of Ukraine and China and it’s all documented. Mr. Biden will soon announce his retirement from the field - to spend more time with his family, or for vague health reasons.

Mrs. Warren has been on a roll since August - with Joe B foundering - but she has two big problems:

1. She seems incapable of telling the truth about her personal “story.” For decades she pretended to be a Cherokee Indian for the purpose of career advancement on various college faculties (including Harvard), and lately she told a whopper about being fired from a teaching job years ago on account of being pregnant, apparently unaware that a tape recording existed of her telling a totally different story - that she quit the job to do something else, even when they offered her a new contract. How many times would those bytes be replayed in 2020?

And 2. She’s retailing a cargo of economic policy bullshit that would turn the USA into Venezuela with sprinkles on top, and she’s already hard-pressed to explain all the numbers that don’t add up in her Medicare-for-all package. Over the weekend, she demanded that transgender illegal border jumpers “must” be released into the United States. There’s a winning issue in the Rustbelt states!

And of course, there are questions a’plenty about the DNC itself and the peculiar mix of race hustlers, Wall Street catamites and war-hawks currently running the outfit. Sounds like a Hillary quorum to me. The DNC handed off the whole operation to the Hillary campaign in 2016 and fixed the nomination with super-delegate hugger-mugger. Is it possible that Hillary still controls the leadership? My guess is that a big chunk of the loot assembled into the Clinton Foundation over the years has enabled HRC to buy the tattered remnants of the DNC lock, stock, and barrel. All that funny money bought a whole lot more, too, including all the predicating bullshit that kicked off RussiaGate, UkraineGate, and now ImpeachGate.

The next gate to go through will be the wholesale prosecution of a whole lot of government officials, elected, appointed, and retired, for the malicious shenanigans that led to the current administrative civil war between the branches and agencies of the government itself. It may prove to be a gate too far for the existence of constitutional government as we’ve known it. All that rot leads to the heads of the big fish: Barack Obama and Hillary. When they are officially implicated, that will be the last roundup for the old donkey. Perhaps something new will organize around the stalwart Tulsi G. She is not alone out there."
- https://kunstler.com/
○
"Hillary Clinton Uses 2016 Tactics As Deflection After
600 Security Violations Uncovered In E-mail Review"