Free Download: Richard Bach, “The Bridge Across Forever- One” 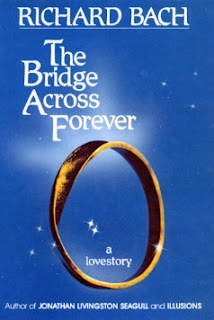 “The Bridge Across Forever- One”

"It's like, at the end, there's this surprise quiz: Am I proud of me? I gave my life to become the person I am right now! Was it worth what I paid?"

"What would it be like to meet oneself in the future, or to encounter oneself in the past before making a life-altering decision? What if there were not simply one reality, but many concurrent realities where each of the possible paths one could take were all played out? What might one learn from an encounter with these different selves? These are the questions Richard Bach asks in his novel “The Bridge Across Forever- One.”

As the book opens, Bach and his wife Leslie are flying into Los Angeles for a meeting when suddenly the familiar landscape disappears beneath them. As their spiritual guide Pye later explains, they have stumbled into another dimension that allows them to view reality as it really is, timeless, the past concurrent with the future, where each life is played out according to an infinitude of different choices. Before they return to their own “spacetime,” Richard and Leslie meet with their other selves, a young pianist, a bomber pilot, a married couple living in Russia, a primitive warlord, a futuristic fighter pilot whose “kills” are as harmless as those in video games, and others. Ultimately Bach and his wife learn that there is more unity in the world than diversity: We are all one, our differences deriving only from the different choices we make.

Bach’s prose is easy reading though not especially elegant. His treatment of characters and scenes is cursory, even superficial. The point of the book, however, is not so much the texture of the story as it is the lessons it tries to teach. At times even the lessons are somewhat simplistic, such as making peace is better than making war, or nothing is more important than love. ONE is not a profound book, but it is thought-provoking. Even if one dos not buy the premise that there are parallel lives, that time is concurrent, and that we are all one, there are still many jewels of insight, such as that hate is simply love without all the information, or that the celebrated unconditional love is really more like indifference. By its very simplicity, ONE invites the reader’s mind to wander, so the reader can make his own connections, think about his own choices, and perhaps even imagine his own alternate selves."

Freely download “The Bridge Across Forever- One” by Richard Bach here:
- http://brainteaser.narod.ru/books/fict/Bridge.pdf