"Time Is Your Most Valuable Asset. Don't Let It Be Stolen" 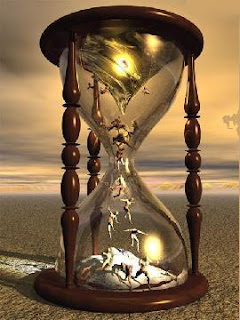 "Time Is Your Most Valuable Asset. Don't Let It Be Stolen"
by Ryan Holiday

"The problem is, you think you have time."
- Buddha

"All day, we let it happen. A neighbor comes by and babbles on about a bunch of nonsense, and we politely nod, even if we are in a hurry. Or some co-workers start gossiping about something petty, and we let ourselves get drawn in, never stopping to think about the time wasted. Or we get a message from an acquaintance that says, “Can I pick your brain?” We tell them, “Sure thing!” because isn’t it rude to say no?

Stoic philosopher Seneca once marveled at how stupid even the smartest people are when it comes to protecting their time: “No person hands out their money to passersby, but to how many do each of us hand out our lives! We’re tightfisted with property and money, yet think too little of wasting time, the one thing about which we should all be the toughest misers.”

More than 2,000 years later, why are we still allowing our most valuable resource to slip from our grasp? I believe there are four reasons.

We think we have plenty of time: We’re told we’ll live, on average, to age 78. That seems like a nearly unlimited amount of time. Of course we can spare 20 minutes here or there. Sure, I’ll agree to that meeting across town that’s going to take me an hour to get to, an hour to get back from, and an hour after that to get settled back in. It’s just another Tuesday, right?

We don’t realize that death hangs over all of us. Lifespans are averages. Nothing is guaranteed. More importantly, time, like money, compounds. So when you’re wasting time, you’re wasting not only the few minutes in front of you, but all that would have been possible had you saved it and directed it properly.

We’re afraid people won’t like hearing “no”: We don’t want to be the bad guy. So we say yes - or we say “maybe” - when we really want to decline. Nothing helped me shake this off quite like having kids. I realized that when I agreed to some unnecessary obligation, the person who suffered was an innocent two-year-old. You have to understand that saying “yes” to this means you are saying “no” to that. And that is often family or other people you care about most. So today, I have a lot less trouble ignoring an email from someone I don’t want to talk to or in giving a firm “no” to something that doesn’t serve my purpose. Because as mean as that might seem, it’s a lot less mean than letting my son go to bed without a hug from me.

We don’t value ourselves enough: Part of the reason we lack the confidence to say “no” and are afraid of hurting people’s feelings is that we don’t think we deserve to put ourselves first. There is a haunting clip in which Joan Rivers, well into her seventies, already one of the most accomplished and respected and talented comedians of all time, is asked why she keeps working, why she is always on the road, always looking for more gigs. Telling the interviewer about the fear that drives her, she holds up an empty calendar and says, “If my book ever looked like this, it would mean that nobody wants me, that everything I ever tried to do in life didn’t work. Nobody cared and I’ve been totally forgotten.”

God, how sad is that? This was Joan Rivers that we’re talking about. None of us are immune to the need to be in demand. One of the reasons why I charge for my time - whether as a marketer or a speaker or a writer - is that I know what I am worth, but I also remind myself that my fee is not my worth. The key is to be firm, but keep your identity out of it.

We have not developed the muscle required for enforcing boundaries: Since most of us don’t have any good systems in place, we default to our weaknesses. We default to pulling out a phone to see what’s going on. We let Netflix and YouTube auto-suggest the next video and the next video and the next video. We let LinkedIn messages and Twitter DMs go right to our inbox, where people can ask us to do things. Our boss can text us at 2 a.m. Think about the offices we used to see in movies - they were big and tucked away behind doors and had secretaries in front of them. Now everyone has an open office where anyone can find them at any time.

Without any protection, we’re put on the spot and far more susceptible to pressure and short-term thinking. A pilot or an EMT doesn’t have this problem. They say, “No sorry, I’m on call tomorrow. I can’t go out.” The boss in the movies used to be able to tell his secretary, “Don’t tell anyone I’m here.”

I have spent a lot of time thinking about what I want my life to look like. Every minute I spend on a phone call that could have been an email, or a meeting that could have been a phone call, is time I didn’t get to spend writing. It’s time I didn’t spend with my family. I often talk to my assistant about protecting my calendar. (Never more than three things in one day is a rule we have.) When I pull up my schedule and it’s mostly blank, unlike Joan Rivers, I feel awesome.

But here’s the other thing: You can say no while still helping people. While I can’t respond to every email I get, I try to take the topics that people have questions about and write articles to address them. And when I say no to requests, I try to think: “No, but I am willing to do _______ instead.” There is a generosity to helping people in this way, but also a benefit if the favor if managed properly.

A smart philanthropist gives away their excess profit, but not the principle that allows them to keep earning money to give away. Applying this to time management took a lot of mistakes for me to learn. I get better at it as I go.

I know I am not antisocial, but I do take my security seriously. I know where I want to spend my time - and I don’t want it taken without my consent. I know what it’s worth.

As I’ve said before, stillness is the key to the kind of life you want, to all the things that make the good life possible. So I avoid phone calls. I decline meeting requests. I’d rather not get a quick coffee. I don’t like podcast invitations. And I ignore most of the emails I get sent. That’s not how I want to spend my precious life and I’m not going to be guilted into doing it. I’m going to try not to inflict those things on other people. Because it’s not that my time is more valuable than anyone else’s, it’s that time is valuable period, and we need to respect that.