“Dust lanes seem to swirl around the core of Messier 96 in this colorful, detailed portrait of the center of a beautiful island universe. Of course M96 is a spiral galaxy, and counting the faint arms extending beyond the brighter central region, it spans 100 thousand light-years or so, making it about the size of our own Milky Way. 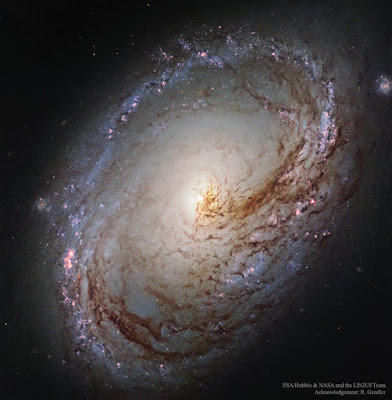 Click image for larger size.
M96, also known as NGC 3368, is known to be about 35 million light-years distant and a dominant member of the Leo I galaxy group. The featured image was taken by the Hubble Space Telescope. The reason for M96's asymmetry is unclear- it could have arisen from gravitational interactions with other Leo I group galaxies, but the lack of an intra-group diffuse glow seems to indicate few recent interactions. Galaxies far in the background can be found by examining the edges of the picture.”
- http://apod.nasa.gov/apod/astropix.html
Posted by CoyotePrime at 10:35 PM