"Fight the Fed: Give Thanks for the Great Disruptor"

"Fight the Fed: Give Thanks for the Great Disruptor"
by David Stockman

"An unbelieved truth can hurt a man much more than a lie. It takes great courage to back truth unacceptable to our times. There’s a punishment for it, and it’s usually crucifixion."
– John Steinbeck, "East of Eden" (1952)

"Even this holiday-shortened trading week needs to be punctuated with “trade deal progress,” as Bloomberg noted this morning. Of course, all Bubblevision’s happy talk won’t – can’t – stave off the coming downturn. Indeed, ZeroHedge recently aggregated the evidence of one half the Red Ponzi’s peril, “trade deal progress” or no: "In the last 30 days, we’ve noted that China’s credit growth rapidly decelerated to the weakest pace since at least 2017 as a continued collapse in shadow banking, weak corporate demand for credit and seasonal effects all signaled that a massive rebound in China’s economy, nevertheless the global economy, in early 2020 is questionable."

We’ll be back to regular order next week, and we’ll hear from Chris Scott about the U.S. and China again next Tuesday. Meanwhile, let’s check in with the Tweeter-in-Chief… Indeed, just when you think he’s plumbed the depths, he comes up with an even more ludicrous monetary proposition. Apparently, during his session with Jerome Powell a week ago today, he explained to the Federal Reserve Chair that, in the global monetary scheme of things, it’s axiomatic that the lowest rate goes to the best player – and that would be himself:

"At my meeting with Jay Powell this morning, I protested fact that our Fed Rate is set too high relative to the interest rates of other competitor countries. In fact, our rates should be lower than all others (we are the U.S.). Too strong a Dollar hurting manufacturers & growth!"

That’s right: Already rock-bottom money-market rates should be lower because, well, “we are the U.S.” Folks, Donald Trump is about as mindless as they come on monetary policy. Still, even he wouldn’t be advocating such rubbish if America’s political economy hadn’t been contaminated by years of Keynesian central banking and the perverted statist narrative that goes with it.

The operative words in the Donald’s tweet, therefore, are not “too high.” They are, in fact, “the rate is set.” The very function of rate-setting leads straight into the briar patch of endless easing and Trumpian monetary debauchery. That’s because agents of the state – neither politician nor apparatchik – can’t know the right rate. They’re inherently tempted to ease. And they aren’t needed for the job, anyway.

The free market is perfectly capable of discovering the appropriate money-market rate based on supply and demand conditions at any moment in time. There is, too, the related shape and level of the yield curve, extending from short-term Treasury bills out to 50-year bonds and beyond. Back in the day, that was known as “free market price discovery.” And it worked just fine.

In the here and now, the Donald probably doesn’t know better when he demands that the Fed “set rates” at a level he mistakenly believes will stimulate growth and prosperity – even MAGA. But the Keynesian apparatchiks who run the central bank printing press are really the dangerous actors in the drama. Notwithstanding massive balance-sheet expansion, relentless financial repression, and ceaseless falsification of financial asset prices, they’ve presided over Main Street business cycle that barely got off the ground.

In fact, there’s been no recovery at all in the core Main Street economy. Electric power output is still down 5.4% from the 2007 pre-crisis peak. And manufacturing output is down 2% after 10 years of so-called recovery:

What they have accomplished is merely to bury Main Street deeper in debt. Total debt is up by nearly $21 trillion from the pre-crisis peak in the fourth quarter of 2007 to a staggering $73.4 trillion at the end of the second quarter of 2019. That’s a 40% increase.

During the same 12-year period, nominal gross domestic product (GDP) increased by only $6.8 trillion. That means it $3 of incremental debt to generate just $1 of additional GDP. At this rate, there would be $100 trillion of combined public and private debt by 2029 on less than $30 trillion of GDP: 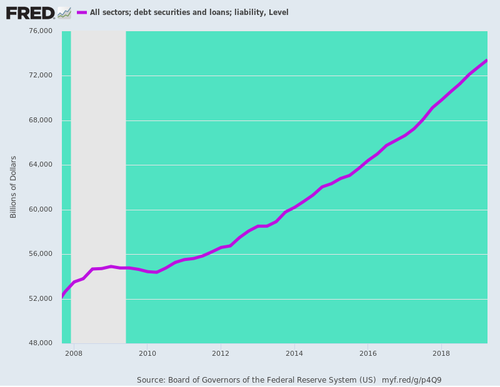 Our wish this holiday week is that there are fewer White House-Fed pow-wows in the months ahead and more of the Donald’s street-brawling fisticuffs. Someone has to stop the monetary central planners before they destroy capitalist prosperity entirely. And, for better or worse, the Great Disruptor is the only hope left."
- http://deepstatedeclassified.com/
Posted by CoyotePrime at 2:57 PM