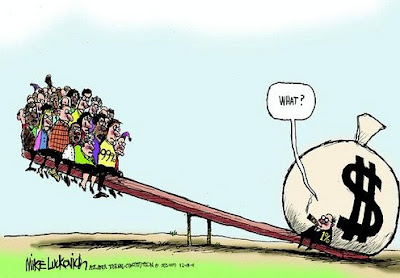 BALTIMORE, MARYLAND – "What a town! Baltimore lives on the edge of civility… like a city on the frontier of the Sahara, gradually being taken over by the desert. There are pockets of grace and charm remaining. But much of the town is already under the sand. Yesterday, walking barely five blocks up the street, a drug-addled bum exposed himself to passersby, and a panhandler asked for money to get a cup of coffee. A moment later, fire engines appeared – sirens whining, lights blazing; a house was on fire. 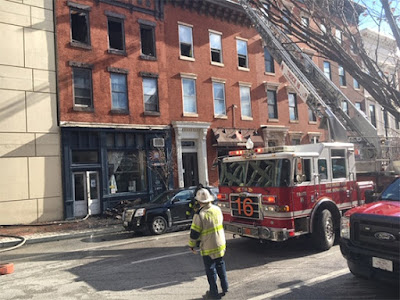 The aftermath of a fire we saw on our walk around Baltimore yesterday.

Proud and Tall: Last night was the “Monument Lighting,” signaling the beginning of the Christmas season. It takes place in front of our office. There stands the nation’s first monument to George Washingon. The monument was designed by Robert Mills, who later designed the more famous Washington Monument on the Potomac. It is based on the column in the Place Vendôme in Paris, which imitates Trajan’s Column in Rome. 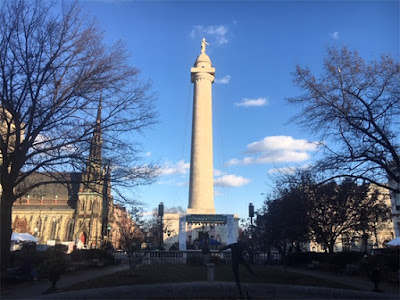 George Washington, standing proud and tall in front of our office.

And there he is, George Washington, proud and tall, atop the marble column, where he has been since 1815… surveying some of the finest 19th-century architecture in the nation. The nearby houses – as well as the Peabody music conservatory and the Walters Art Museum – are among the most elegant buildings of the era. And today, the buildings are still there, but Gen. Washington commands only a narrow strip of civilized urban America, threatened with being overrun at any moment. On his right flank are the poor… the embittered masses and flash mobs. On his left is the city government, with its closet collectivists and visible incompetence.

Grand Larceny: Last year, the bands played loud, obnoxious music until the mayor – arriving 45 minutes late – finally took the mic. But poor Catherine Pugh made no appearance this year. She pleaded guilty to corruption charges two weeks ago and currently faces 35 years in the pen. The Chicago Tribune explains that Ms. Pugh is hardly the first fraudster in the mayor’s office: "Pugh became Baltimore’s second mayor in less than a decade to step down because of scandal. Former Mayor Sheila Dixon left office in 2010 as part of a plea deal for misappropriating about $500 in gift cards meant for needy families."

Donald Trump was right about Baltimore. It is a “disgusting, rat and rodent-infested mess.” But it has its charms, in a low-rent kinda way. It is quirky. It is funky. Housing is relatively cheap. And the city makes it easy to feel superior, since half the fauna you meet on the downtown streets are either mental defectives or petty criminals.

A half an hour down Interstate 95, it is a different story completely. Where Baltimore is wild and poor, Washington is tame… and one of the richest cities in the nation. It has fancy restaurants, houses worth millions, sleek offices. There, the people you meet on the street are powerful movers and shakers. They wear Italian suits and have better manners. Grand larceny is their game… not petty thievery.

Still Begging: The average annual wage in Washington – third-highest in the nation – is $69,000. In Baltimore, it is only $56,000. And between Baltimore’s prosperous northern suburbs, old and new, and the inner city of West Baltimore, there is an even greater gulf. In the northern suburbs live the doctors, lawyers, and insurance salesmen. In West Baltimore struggle the addicts, unwed mothers, and gangsta teens. Not that one group is necessarily better than the other; we don’t know who goes to Heaven. But they are different. And homogenizing them all as Baltimorians, or even just as Americans, does us a disservice.

The person born into a prosperous family in Guilford can expect to live into his 80s, more or less like a Swede or a Frenchman. But enter the world west of Martin Luther King Jr. Boulevard, and life expectancies fall to barely 60; you might as well live in Haiti or Madagascar, without the good weather. Averages obscure the picture. Put nine street vagrants together with Elon Musk, whose net worth is about $26.5 billion. You’ll get an average net worth of $2.65 billion each. But nine out of 10 of them are still begging.

Statistical Fog: A similar statistical fog hangs over the nation. Here’s Tara Westover in The Atlantic: "In recent years, growth has been hyper-concentrated in our cities, which are hubs of technology and finance. Meanwhile, the hinterlands, which rely on agriculture and manufacturing – what you might call the “old economy” – have sunk into a deep decline. There are places in the United States where the recession never ended. For them, it has been 2009 for 10 years.

Our own research team looked at the U.S. county by county. It put together a map to show which counties were in recession, coloring the depressed counties in red. You can see it yourself. And guess what? There’s a helluva lot of red on this map. Analyst Joe Withrow explains: "The map shows that people in 2,278 counties have gotten poorer over the past 10 years. As best as we can tell, that means 73% of U.S. counties are in a depression. Seventy-three percent!"

Not a pretty picture. Neither in Baltimore… Nor the rest of the nation."
-https://bonnerandpartners.com/
Posted by CoyotePrime at 2:04 AM