"Screw the Way Things Are, I Want Out" 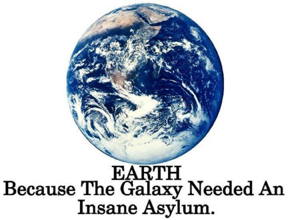 "Screw the Way Things Are, I Want Out"
by Paul Rosenberg

"This is a beautiful planet, filled, in the main, with decent, cooperative humans. And yet, I want out. Give me any kind of functional spaceship and any reasonable chance, and I’ll take it. This place is anti-human. It chokes the best that’s in us, aggressively and self-righteously.

I was struck not long ago by a comment of Ludwig Wittgenstein’s, in which he expressed the same kind of feeling: "I ought to have… become a star in the sky. Instead of which I have remained stuck on earth…"

All of us who’ve had a moment of transcendence - who made some type of contact with what is truly the best inside ourselves - have also sensed that life in the current world is incompatible with it. I think we should stop burying that understanding beneath piles of “that’s the way things are,” “we should be realistic,” and “you can’t fight City Hall.” Screw the way things are, screw “realistic,” and screw City Hall too. I was made for better things than this, and you were too.

Everywhere I turn, some kind of ruler, sub-ruler, enforcer, regulator, or “right-thinking” quasi-enforcer demands not only my money but also for me to make myself easy to punish, thus showing myself to be a good subservient. That’s not just wrong; it’s a disease. I don’t care whether such people are “following orders,” “just doing their job,” or whatever else they tell themselves to soothe their rightly troubled souls. That mode of living is perverse, and these people are enforcing a disease.

Let me make this part very clear: The desire to control others is disease; it is corruption. Willing controllers are a morally inferior class. And the truly deranged thing is that these people rule the world! Forget about why this is so - we can debate that later - focus rather on the utter insanity of this: A minority of moral defectives, who think extortion is a virtue, rule people who are happy to live and let live... by force.

That’s outright lunacy. And to support the lunacy, we have lies, intimidation, and slogans: “In a democracy, you’re really ruling yourself,” “Only crazy people disagree,” “It’s always been this way,” and so on. To all of which I reply, How stupid do you think we are? You drilled that crap into us when we were children, but we’re not children anymore. And if “our way” isn’t as bad as North Korea, that makes it right? Only to a fool.

And the results of “the way it’s always been”… my God, the results… A study from the 1980s[1] found that since 3600 BC, the world has known only 292 years of peace. During this period there have been 14,531 wars, large and small, in which 3.6 billion people have been killed. This is what I’m supposed to serve with all my heart and soul? A Bronze Age system that can’t keep itself from slaughter? We’re talking about a 5,600-year track record of mass death… and yet fundamental change is considered unthinkable?

Well, screw that too, because I think deep, fundamental change is called for, and was called for a long time ago. Again, this is a wonderful planet and most of the people on it are decent, but it is ruled by insanity, and I want out. Yes, I know, there’s really nowhere to go. Every place I might go is dominated by the same diseased model, and dissent is punished the same, and in some places worse. That’s one of the reasons space appeals to me; it gives me a chance to escape this madness.

I’ll draw this to a close with a passage from C. Delisle Burns’s wonderful "The First Europe," describing why the Roman Empire collapsed: "Great numbers of men and women were unwilling to make the effort required for the maintenance of the old order, not because they were not good enough to fulfill their civic duties, but because they were too good to be satisfied with a system from which so few derived benefit."

I, for one, am unwilling to expend any effort to maintain the present order. It is by its nature incompatible with the best that is in us, and always will be. Those of us who want to be more and better cannot support the current order without opposing what’s best in ourselves. Screw that.”
- www.freemansperspective.com

[1] It was published fairly widely at the time, but I lost track of the details and it seems to have persisted only among religious groups. The best information I have is that it was published by the Norwegian Academy of Sciences in 1984.
Posted by CoyotePrime at 9:56 AM