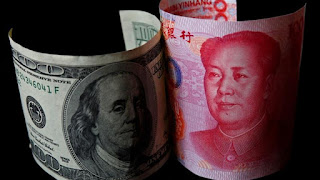 
"Here's a late-night TV parody of a trade deal: The agreement won't be signed by both parties, though each might sign their own version of it, and the terms of the deal will never ever be revealed to the public, which includes everyone doing any business in the nations doing the "deal."

How is this "deal" not a pathetic parody of a real deal? A real deal is signed by both parties and is made public, so the business community can make informed decisions. The leaders who sign the agreement have to sell their respective nations on the benefits of the deal and explain the horse-trading that is part and parcel of any voluntary agreement. But nope, this "deal" has none of that. If the "deal" is so great, why is it secret?

Anyone claiming a deal so odious or empty that it can't be revealed to the electorate has destroyed whatever credibility they had left after 18 months of teases and promises. Put yourself in the shoes of a soybean farmer. Are you going to plant another 1,000 acres of soybeans because now that the "deal" is done, you can be absolutely confident that your entire harvest will be bought by China? You're joking, right? Anyone making decisions based on this travesty of a mockery of a sham "deal" should have their medications checked.

And scene: Corporate America boardroom: CEO stands and addresses the board:

CEO: Now that the President signed off on the "deal," I propose we invest $100 million in a new factory in China, because the President said it was a "great deal."
Board member: But we have no idea what the deal even specifies.
CEO: Well, I'm sure it's "great."
Board member: The Chinese are signing a different version of the deal, they're not even signing whatever the President signed off on.
CEO: I'm confused. The trade "deal" is done, so let's move forward with the $100 million.
Board member: But there are no credible enforcement mechanisms in the deal. Our intellectual property is at risk, and for what gains? Expanding production in Vietnam is less risky, production costs are lower and there's none of the uncertainty we face in China.
CEO: The "deal" has been signed, so everything's fixed, correct?
Board member: Nothing's been fixed, and I'll have to call for your resignation if you insist on gambling $100 million in China, a gamble that could destroy this company.

Please tell me this "trade deal" is a bad joke, a parody being played for laughs. Please don't tell me anyone is taking it seriously. Hey, I have a deal for you, a great deal. The other party is signing another version, but never mind, it's a great deal. And all the terms are secret, but never mind, it's a great deal. Everyone connected with this pathetic parody has lost all credibility. Anyone who thinks this bogus "deal" has resolved any of the issues or uncertainties deserves to be fired immediately.”
- https://www.oftwominds.com/blog.html
Posted by CoyotePrime at 8:16 AM