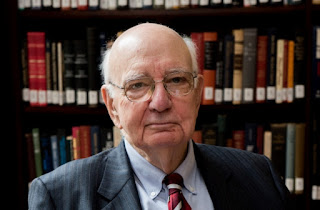 "It is a sobering fact that the prominence of central banks in this century has coincided with a general tendency towards more inflation, not less. [I]f the overriding objective is price stability, we did better with the nineteenth-century gold standard and passive central banks, with currency boards, or even with “free banking.” The truly unique power of a central bank, after all, is the power to create money, and ultimately the power to create is the power to destroy."
– Paul Volcker, from the foreword to
"The Central Bankers" (Deane and Pringle, 1994)

"I thought I knew exactly where to begin today – with the news of the passing of Paul Volcker, the last American central banker who had any meaningful respect for both a free market and the role of the state vis-à-vis the individual.

But, then, I noticed The Washington Post had published this piece: "Confidential documents reveal U.S. officials failed to tell the truth about the war in Afghanistan." The New York Times, in its follow-up reporting, was a little more on the nose: "BREAKING NEWS: “We didn’t know what we were doing.” Documents uncovered by The Washington Post reveal misleading statements by U.S. officials on the Afghan war."

Folks, the Acela Corridor has come undone. It happened long ago, well before this “Pentagon Papers Redux.” Tall Paul’s passing, with more accumulated Warfare State garbage put out on the same day, only reinforces the feeling. May he please rest in peace.

It’s not enough that Leviathan runs roughshod across the globe. Perhaps, though, it couldn’t but for the fact that the Federal Reserve – untethered from the type of wisdom people like Paul Volcker exercised, in thrall of power – has unleashed a series of financial bubbles each one more monstrous than the came before it. But the next one is just about guaranteed to end Bubble Finance.

Here’s the smoking monetary bazooka on top of all that has gone before: 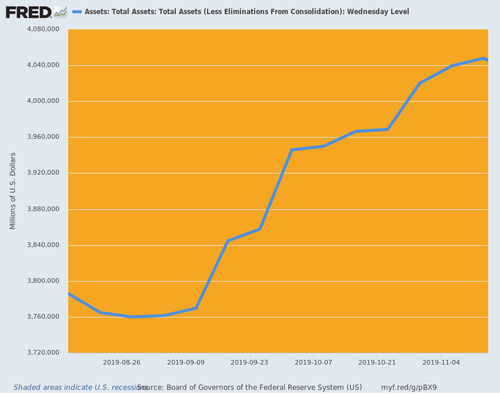 At the tippy-top of the longest uninterrupted stretch of economic growth ever recorded – with gross domestic product (GDP) expanding at 2.1% during the last quarter and the lowest headline unemployment rate in 50 years – the Fed just turned on the afterburners on its printing presses. Since the repo ruction in mid-September, the Fed has expanded its balance sheet by nearly $300 billion. That’s a $1.5 trillion annual rate. It’s even faster than Benjamin Bernanke ran the printing press during the dark days of 2008-10.

This is pure madness. It’s had only one (entirely predictable) effect: It triggered another buying spree/“FOMO” rally for no other reason than our monetary central planners have indulged Wall Street once more. The 16% trimmed-mean consumer price index recently stood at 2.36% compared to a Fed ordained money-market rate of 1.55%. That means the cost of carry-trade funding is now -81 basis points in real terms. Those are cheap gambling stakes. That’s as low as its been for most of the past 10 years. So, Wall Street’s gamblers once again think they’ve died and gone to free-money heaven – again. And they’re acting accordingly.

In fact, the Fed’s short-lived effort at “normalization” – when the federal funds rate actually exceeded the inflation rate – lasted only eight months.

The Fed punted in July with the first of three rate cuts. And we’re now back in negative territory – the destructive range where our monetary central planners have pegged the money-market rate for 132 months out of the last 140. 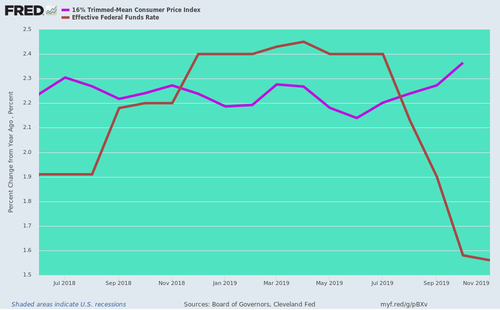 In vernacular terms, that amounts to running a devil’s workshop on Wall Street. But the longer this goes on, the more toxic the incentives for reckless speculation become.

Folks, this is one thing in Imperial Washington that’s not about the Donald, though. These fools would have pumped their balance sheet and lowered rates to placate Wall Street anyway, even had Trump not been hounding them almost daily with his easy-money tweetstorms.

The estimable Gary Kaltbaum said it about was well as such madness can be described: "Powell leaked his change of stance on Christmas eve from "raising rates" in 2019 to "patience!". Markets bottomed immediately. Powell confirmed the leak a few days later. Markets rallied into the end of April before a whopping 6-10% correction into the end of May.

Word leaked out around October 3rd that there was consideration for some sort of QE.  What? QE with 3.6% unemployment and with markets up 15-20% on the year? Just on a "leak", markets bottomed that day. AND  on October 8th, not with an announcement but in an interview at some sort of economic's club, Powell confirmed "QE BUT DON'T CALL IT QE.

It wasn't any ordinary QE but as of this writing, Powell is on a run rate of over $1.5 trillion of printed money for the next year. This is more than Bernanke's ($1 trillion) QE at its most. Just keep in mind, Bernanke printed money when unemployment was in the high single digits and when we still did not know if our financial system was stable. What is Powell's excuse doing this at 3.6% unemployment and with markets near highs?

What’s worse, these madmen and madwomen have the gall to insist that this burst of money-printing is just technical. They’re merely smoothing and enhancing the availability of bank reserves, which now stand at about $1.5 trillion… In the spirit of Paul Volcker, I call bullshit."
- http://deepstatedeclassified.com/
Posted by CoyotePrime at 3:16 PM