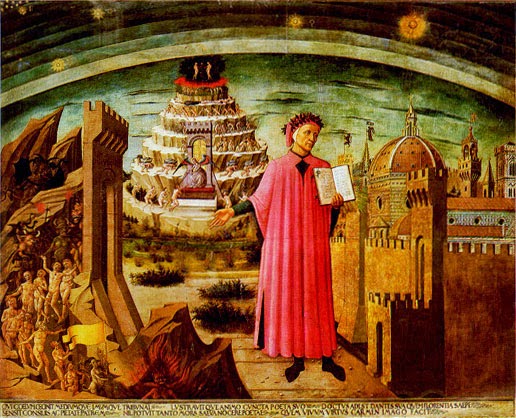 “'The Divine Comedy' (Italian: "Divina Commedia") is an epic poem written by Dante Alighieri between c. 1308 and his death in 1321. It is widely considered the pre-eminent work of Italian literature, and is seen as one of the greatest works of world literature. The poem's imaginative and allegorical vision of the afterlife is representative of the medieval world-view as it had developed in the Western Church by the 14th century. It helped establish the Tuscan dialect, in which it is written, as the standardized Italian language. It is divided into three parts: Inferno, Purgatorio, and Paradiso.

On the surface, the poem describes Dante's travels through Hell, Purgatory, and Heaven; but at a deeper level, it represents allegorically the soul's journey towards God. At this deeper level, Dante draws on medieval Christian theology and philosophy, especially Thomistic philosophy and the "Summa Theologica" of Thomas Aquinas. Consequently, the Divine Comedy has been called "the Summa in verse".

The work was originally simply titled Commedìa and was later christened Divina by Giovanni Boccaccio. The first printed edition to add the word divina to the title was that of the Venetian humanist Lodovico Dolce, published in 1555 by Gabriele Giolito de' Ferrari."
- http://en.wikipedia.org/wiki/Divine_Comedy 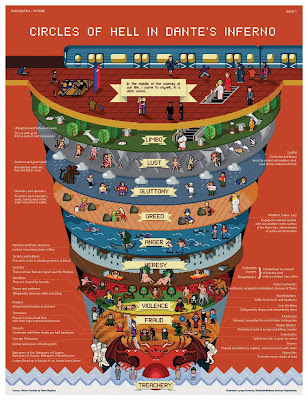 Hat tip to "JustChecking's Weblog On All"
◆
Freely download "The "Summa Theologica", by Thomas Aquinas, here:
- http://www.documentacatholicaomnia.eu/
Posted by CoyotePrime at 4:42 PM