"Some Practical Questions About The Coronavirus Epidemic" 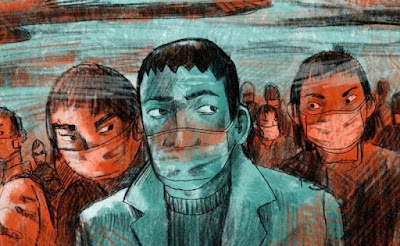 "Some Practical Questions About The Coronavirus Epidemic"
by Charles Hugh Smith

"1. When public transportation is halted and commerce grinds to a halt as people avoid public places and gatherings, thousands of employees no longer go to work. Who pays their wages while the city is locked down? The employers? Then who compensates the employers, since their income has also gone to zero?

Does China have a universal unemployment insurance system that can quickly issue payments to all people who are no longer going to work and getting a paycheck from an employer?

What about the thousands of migrant workers who don't have regular employers? Who pays them? If they're technically not officially sanctioned residents of the city, they don't exist in government records.

2. If people idled by the lockdown are supposed to live off savings, what about all the marginal workers with few resources? What are they going to live on once their meager savings are gone?

3. Given the choice of obeying the lockdown rules and starving or slipping out of the city to find paid work somewhere else, how many migrant workers will choose to slip away?

4. Unlike the developed West, many people in China still have ancestral villages to return to, rural towns where their grandparents or or other close relatives live. If work has dried up and you're fearful of catching a potentially lethal virus, wouldn't it make sense to slip out of the city and make your way back to the village where you can hunker down until the epidemic blows over?

Since people who caught the virus may not know they're a carrier, how will this migration not spread the disease to rural areas with few medical resources?

5. The typical city has about a week's supply of food, fuel, etc. at best. If the lockdown runs longer than a few days, scarcities of essentials will ignite hoarding, and remaining supplies will be snapped up.

Since the city's residents need food, fuel, etc., it must be brought in regardless of the lockdown. This brings outside workers into the city and provides residents desperate to flee avenues to escape the lockdown. Every individual involved in this system is potentially exposed to the virus or is a potential asymptomatic carrier of the virus leaving the city.

These realities leave officials with an impossible choice: either truly isolate the city, which isn't possible for more than a few days, or allow the stupendous flow of goods required to sustain millions of city residents, thereby creating uncontrollable avenues for the virus to spread beyond the city as transport workers and those fleeing the lockdown travel to other cities.

6. The only way to end a contagion is to identify every carrier of the disease and immediately isolate them in full hazmat mode, and then track down every individual they had contact with during the incubation/asymptomatic period of the disease - up to two weeks - and isolate all these individuals until they either develop the disease or pass through the crisis unharmed.

This was the basic procedure used to end the SARS epidemic in 2003. As this article from the The New England Journal of Medicine explains ("Another Decade, Another Coronavirus", (via correspondent Cheryl A.), the Wuhan Coronavirus shares characteristics with SARS and cannot be dismissed as just another run-of-the-mill flu virus.

During this process of isolating/quarantining everyone with the disease and everyone they had close contact with, all healthcare workers caring for these people must also remain isolated from the general populace lest they become infected and spread the disease outside the quarantine.

Treating people in crowded hospitals where hundreds of people are coming and going and moving freely into the rest of the city won't stop a contagion from spreading.

If the only way to end a contagion is to identify every carrier of the disease and immediately isolate them, and then track down every individual they had contact with during the incubation/asymptomatic period of the disease - is this even possible in China now? 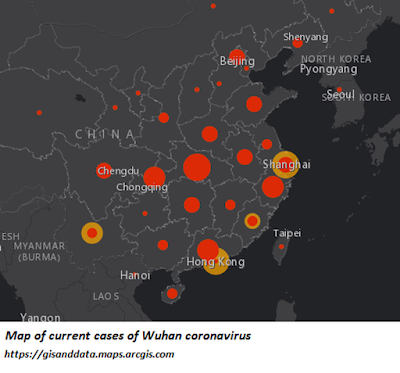 Click image for larger size.
7. China is making a big show about sending 1,000 doctors to Wuhan, but precisely what medical treatments are available for this virus, how effective are these treatments, and do they require a physician to be administered? If the answers are: there are no effective targeted medical treatments for this virus, and doctors are not required to administer what is available, then why expose a scarce resource - physicians - to the disease since they really can't do much to halt it or heal the patients?

Isn't sending 1,000 doctors to Wuhan more a PR move than anything else? And if it's basically a PR stunt to appear to be "doing something," doesn't that call the entire official response into question?

If there is no targeted treatment available, then the recovery of the patient is a function of their immune system. Building tent hospitals that are porous - healthcare workers returning home after their shift, relatives visiting the stricken, workers moving supplies in and out of other facilities, etc.-will do little to isolate carriers and potential carriers. And since complete isolation is the only way to stem the contagion, these porous tent hospitals won't do much to limit the contagion.

8. Are the travel bans on tours and other travel restriction measures 100%, in other words, not a single individual is being allowed in or out? If the travel restrictions are haphazard, then what's stopping asymptomatic carriers of the virus from traveling freely around the world?

There are many other practical questions about the epidemic and China's response that aren't being addressed in the conventional media. While we don't know precisely how contagious and lethal the virus is at this point - and it could mutate into a more contagious and lethal variation within a carrier at any moment - we do know complete isolation of every carrier and everyone they had close contact with is the only way to end the contagion.

We also know cities can't truly be isolated for longer than a few days, and we know people can't live without food, water, fuel, etc. and money to buy these essentials. We also know that restrictions that allow a significant number of people to move about, either with official approval or unsanctioned "black market" activity, cannot stop the spread of contagious diseases."
- https://www.zerohedge.com
○
Related Updates: