"Prepare To Have Your Worldview Obliterated" 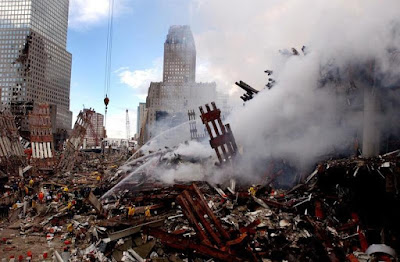 "Prepare To Have Your Worldview Obliterated"
by Caitlin Johnstone

"The first draft of the civil rights-eroding USA PATRIOT Act was magically introduced one week after the 9/11 attacks. Legislators later admitted that they hadn’t even had time to read through the hundreds of pages of the history-shaping bill before passing it the next month, yet somehow its authors were able to gather all the necessary information and write the whole entire thing in a week.

This was because most of the work had already been done. CNET reported the following back in 2008: “Months before the Oklahoma City bombing took place, [then-Senator Joe] Biden introduced another bill called the Omnibus Counterterrorism Act of 1995. It previewed the 2001 Patriot Act by allowing secret evidence to be used in prosecutions, expanding the Foreign Intelligence Surveillance Act and wiretap laws, creating a new federal crime of ‘terrorism’ that could be invoked based on political beliefs, permitting the U.S. military to be used in civilian law enforcement, and allowing permanent detention of non-U.S. citizens without judicial review. The Center for National Security Studies said the bill would erode ‘constitutional and statutory due process protections’ and would ‘authorize the Justice Department to pick and choose crimes to investigate and prosecute based on political beliefs and associations.’

Biden’s bill was never put to a vote, but after 9/11 then-Attorney General John Ashcroft reportedly credited his bill with the foundations of the USA PATRIOT Act. “Civil libertarians were opposed to it,” Biden said in 2002 of his bill. “Right after 1994, and you can ask the attorney general this, because I got a call when he introduced the Patriot Act. He said, ‘Joe, I’m introducing the act basically as you wrote it in 1994.’”

I point this out because it is now more important than ever to be aware that power structures (and their goons like Biden) can and will seize on opportunities to roll out pre-existing authoritarian agendas. We know it happened after 9/11, and we may be absolutely certain that it is happening now.

Commentator and satirist CJ Hopkins has a long, long, long, long ongoing thread on Twitter right now compiling dozens and dozens of creepy Orwellian steps that have been taken by governments around the world and by Silicon Valley tech giants in response to the virus over the last three weeks. I emphasize how long the thread is because if you think you’ve finished scrolling through it you probably haven’t; make sure you keep clicking “more replies” until you get to the current entries.

I strongly encourage everyone to scroll through the thread when you get a chance to get a sense of the scale and scope of the drastic measures that are being implemented around the world, and maybe bookmark it and keep checking back now and then for updates. The entire thread is comprised of mainstream media articles with excerpts; some entries are more jarring than others, but taken as a whole it becomes clear that we’re looking at a whole lot of power being handed over to the kinds of institutions which historically don’t do good things when given a lot more power.

And these are just the steps we know about.

To what extent are these drastic, intrusive, authoritarian measures justified? The answer, in my estimation, isn’t clear yet. There are too many unknowns about the virus, too many unknowns about the responses to it, and too many unknowns about exactly what is going on behind the veil of secrecy in opaque government agencies around the world. There’s an argument expert epidemiologists are making that there’s no time to get perfectly certain of these things before dealing with a pandemic, that speed is of the essence and hesitating due to fear of maybe getting something wrong can cost millions of lives. Maybe that’s true; I’m not an epidemiologist and I do not know.

What I do know is that enormous changes are happening, and that powerful people are definitely conspiring to advance their own interests as this unfolds. There are many theories about who specifically is conspiring with whom and the specific manner in which they are doing so, and they’re being dismissed by establishment loyalists as “conspiracy theories” as though that in and of itself constitutes some sort of argument. That conspiracies are happening is actually just a fact that is obvious to any adult with a mature understanding of the world, and it can be useful to come up with theories about how that might be occurring; calling theories about conspiracies the thing that they are in a disparaging tone does not actually invalidate them.

There are a ton of theories about what’s going on behind the scenes with this pandemic and the policies that are being put in place to respond to it. Some are smart and relatively well-founded, some are stupid and rooted in generalized paranoia or partisan idiocy, many contradict each other, and many could potentially fit together in some way. I personally haven’t seen enough evidence for any one theory to throw my weight behind it, but I am watching carefully, and I am glad that the hive mind is chewing on this riddle.

One thing I will put my weight behind right now is the prediction that those of us who are dedicated to truth are going to have to drastically revise our worldviews in the coming months. There are such large-scale shifts happening in such an unclear information environment that the only thing we should expect is the unexpected; this virus is shaking things up (and being used to shake things up) in ways we don’t really understand yet, and even before the virus the world’s dominant power structures were acting very weird. This means our ideas about what’s going on in the world will likely have to undergo some revising in the relatively near future; the bigger the revelations, the more revision will be necessary.

Right now that’s the primary piece of advice I have to offer: stay skeptical, stay intellectually honest, and keep your perspectives malleable. If we are more interested in the truth than we are in being proven right or in feeling smug, then we are likely on a collision course with future revelations that will change our ideas about how the world is functioning in some pretty significant ways. If this doesn’t sound possible to you, it’s only because you currently lack the humility, intellectual honesty and cognitive flexibility to understand that you may not be seeing the full picture yet. Things are shifting; all we can do is keep our minds agile enough to shift with them. Prepare to have your worldview obliterated."
- https://www.zerohedge.com/
Posted by CoyotePrime at 5:18 PM