"What Lies Ahead: Destabilizing Social Stratification" 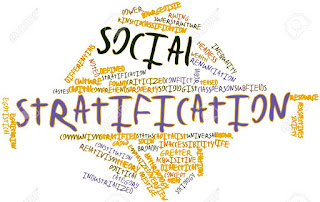 "Our socio-economic-political system - let's call it the status quo - has been hollowed out by extremes of wealth/power inequality driven by financialization and globalization, which have enriched the top 5% and left everyone else behind. As a result, the status quo has become increasingly fragile and brittle even as cheerleaders claim everything's never been better - witness yesterday's massive rally in stocks on a jobs report which suggests the V-shaped recovery is already well underway. The fly in the ointment is even a V-shaped recovery won't repair the structural distortions which have generated levels of social stratification that are inherently destabilizing.

One way to understand this is: the bill for extreme wealth/income inequality is now overdue, and the penalties for ignoring the bill will be as extreme as the inequality. An uneasy set of orthodoxies has masked the financial and social stratification that has widened as the wealthy have pulled away from the bottom 95% and hardened as the ladders of social mobility have decayed. 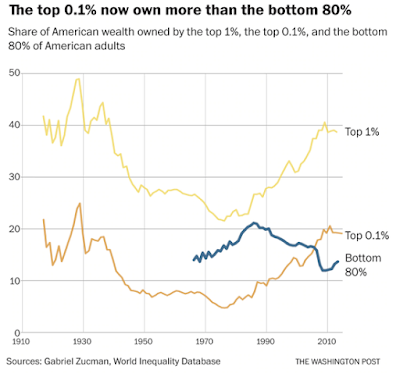 One orthodoxy is that multiple university degrees are a surefire ticket to secure, well-paying careers. Outside of a few specialties, this orthodoxy has foundered on a global over-supply of university credentials and a scarcity of secure, well-paying jobs. Whatever jobs do pay well trace back to financialization, globalization or moated bastions of privilege and power that protect insiders from competition, accountability and transparency.

Another orthodoxy is that "anyone can get rich in America," a.k.a. we're all just one YouTube channel/influencer contract away from becoming rich. That such ephemeral success is now the bright beacon (apparently replacing flipping houses as real estate has stagnated) speaks to just how rickety the social mobility ladder has become: most of the rungs have rotted away.

The ultimate orthodoxy is that growth is infinite with the implication being the tide of expansion is lifting all boats, and so the system is working for everyone. Now that the tide is ebbing, that mask has been ripped away. A great many people feel that they did all the right (i.e. mainstream) things and are working hard but their financial and social status remains precariously dependent not just on the expansion continuing forver but on their ability to borrow more money increasing as well.

An unstated corollary of infinite growth is that the wealth effect will also expand forever, too, so all you need to do to get rich is buy a house or two and buy stocks and then sit back and watch them increase in value.

A V-shaped recovery doesn't change the financial-social stratification. Rather, the stratification will increase and harden, leaving fewer options to move up the ladder and greasing the slide down to lower levels of security, safety, wealth and income. Even the wealthy class (top 5%) will further stratify as those with high employment and capital mobility can move their households and capital to safer, lower-tax regions.

The immobile top 5% will be corralled by cash-starved municipalities as the tax donkeys who must pony up higher taxes for the privilege of living in cities and suburbs which will become less secure and less entertaining even if the much-anticipated V-shaped recovery occurs. The top 5% tax donkeys will be expected to pay much higher taxes even as the wealth effect that generated the 30-year boom since 1990 flips into the reverse wealth effect as extremes of over-valuation revert to the mean.

The bottom 95% will also stratify into the mobile few and the immobile many. By mobile I don't just mean the freedom to move to another locale (because you work remotely) or move your capital around - I mean the mobility to move into a new field of endeavor, or move up into a a higher level of financial and physical security.

Those with fewer options to change their circumstances are increasingly frustrated, as the status quo grinds on, further enriching the few while the social-mobility ladders for everyone left behind continue crumbling. This frustration manifests in a number of ways, from public protests and riots to under-the-radar opting out, an option I discussed in "Opting Out, American Style" (May 22, 2020).

As my colleague Jesse explains in our latest Axis of Easy Salon podcast, "Nevermind the influencers, here come the revolts", broad-based revolts include a plurality of participants, some organized, some not, some public, some private.

As I've often noted here, the gap between high expectations and reality is a reliable source of social and political disorder. If everyone with low social and financial mobility is resigned to their poor prospects even as the wealthy class revels in its "natural" superiority, society can remain stable despite the widening gap between the few and the many.

But if the multitudes with poor prospects harbor high expectations, being stuck in a highly stratified economy and society will eventually ignite a revolt and systemic disorder as the elites defend their position and demand the multitudes accept their low mobility and status as "the natural order" that should not be disrupted.

As the orthodoxies of social mobility fail and stratifications harden, the high expectations built into America's social-mobility orthodoxies erupt as revolt and disorder. As noted above, the bill for extreme wealth/income inequality has now come due, and the price for ignoring the social stratifications created by inequality will be as high as the inequality itself."
- https://www.oftwominds.com/

My COVID-19 Pandemic Posts
Posted by CoyotePrime at 8:47 AM