"For First Time Since The Great Depression, Americans Must Wait In Line For The Most Basic Essential Items" 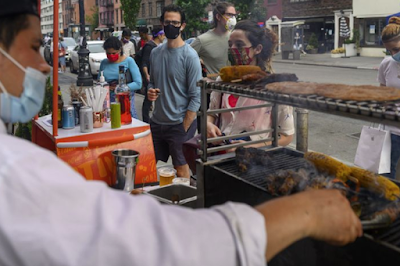 "For First Time Since The Great Depression,
Americans Must Wait In Line For The Most Basic Essential Items"
by Tyler Durden

"The scene can be somewhat dystopian and third world when you look at it: as a result of the pandemic and the new way that our economy is forced to do business, Americans all over the country are waiting in line - even for the most basic of essentials.

For example, Bloomberg points out that food banks in Vermont have to deal with "miles long" lines of cars and at Covid testing sites in Florida, people have to show up with full tanks of gas because of how long they have to wait. 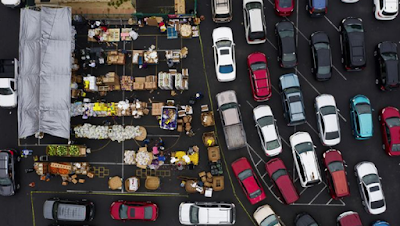 People applying for unemployment have similar horror stories - as we have detailed - trying to pile onto an overwhelmed website to collect benefits and left with no one to call when the system doesn't function properly. The physical waits in unemployment lines are similarly distressing.

Kara Eaton, a 27-year-old industrial welder from Eufaula, Oklahoma, said: “We have to hope that the person next to us in line will hold our place while we use the bathroom - Subway usually doesn’t mind if we use theirs.”

Rachelle Basaraba of Oregon said: “Having to be patient and wait your turn - I don’t know if that’s necessarily the American way.” She says that a “herd mentality” and respect for rules bring order to waiting in line in Denmark, where her company is based. She called this a “a positive thing,” though was unsure about how it would catch on the U.S.

This time in America is the first since the Great Depression to make Americans wait in line for limited resources.

J. Jeffrey Inman, a marketing professor and associate dean at the University of Pittsburgh’s Katz Graduate School of Business, said: “The U.S. is getting a dose of the scarcity economy, and we don’t like it. The U.S. has gotten spoiled where we’ve always had a plentiful, efficient supply chain. Now we’re seeing what can happen once it gets disrupted.” 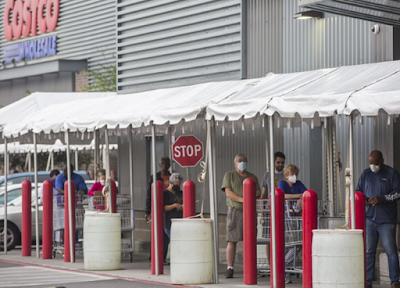 But capitalism is trying to swoop in and solve the problem. For example, a company called Lavi Industries, that usually makes post-and-rope systems for Homeland Security, is now involved in making plastic sneeze guards and portable stations for lines to make the waiting for bearable. They are also working on their "virtual queueing technology," which is a smart phone technology that can summon customers out of line from afar.

Perry Kuklin, Lavi’s marketing director, put it simply: “People hate to wait. If you make it more pleasant, make it more efficient, you as a business can not only profit from it, but you create a better passenger experience or theater experience.”

Richard Larson, a Massachusetts Institute of Technology professor and expert on queuing theory, says the issue is just temporary: “My parents had to wait in a bank queue line between 10 a.m. and 3 p.m. and now ATMs are everywhere. We have umpteen more gas station pumps you can stop at. A lot of traditional pesky queuing is gone.”

Some Americans are trying to make the best of the situation. “It was time to stop and notice, to look around and watch, to not be on my phone. I tried just to be there,” said Dena Babb of Torrance, California, about trying to be mindful while enjoying waiting in line.

But other Americans continue to grow more and more skittish about the practice, leading to another vein of increased tension across the nation. Francisco Salazar of East Meadow, New York, concluded: “Earlier in the pandemic, they were checking people for masks, cleaning the carts, giving sanitizer - they’re no longer doing any of it. I feel paranoid. I don’t want to be on these long lines.”
- https://www.zerohedge.com/
○
Related:
"Drumbeats of the Epocalypse:
The Economic Death March Has Come to Town!"
"A parade of headlines has been marching into town during the past couple of weeks, telling a story of death and destruction due to a plague hitting a world burdened under a crushing load of debt, papered over with optimistic accounting gimmicks that emit a sweet stink something like rose water poured over decaying meat. How can anyone not hear the following noisy parade coming?