"Get Out While You Can, Revisited" 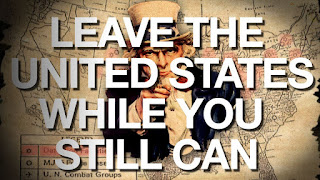 "Get Out While You Can, Revisited"
by Llpoh

"Just under two years ago I wrote the article that follows. It garnered a lot of comments, and I encourage you to revisit them to see how well they have stood the test of time. The original article can be found here. If anything, I was far too optimistic in my assessment. It is now too late to get out, as you can easily see. I did what I could to sound the alarm. I told you so, and it brings me no pleasure (well, maybe a little) to say that.

Interestingly, there are a number of posters on the original thread that said they would fight when the time came. I called bullshit then, and still do. Things are far worse today than then, but no fighting is happening. None. The other side is better organized, and they are marching armed and un-impeded wherever they choose. It looks more and more like the normal folks are surrendering without even a dying whimper. Much as I suspected and predicted. It is not a criticism, just a statement of fact. The left and the minorities have won. If the Hispanics ever join the leftist march, it is well and truly over.

Does anyone see a way out? The $5 trillion or more yearly deficit, the loss of Liberty to the pandemic, the acquiescence of all organizations and businesses to the demands of the left, the inability to even argue with a black person without losing your job, the loss of freedom of movement, the ability of the radicals to commandeer interstate highways and cities without so much as a “that is illegal” from elected officials, the erasure of history, the inability to defend your person or property, etc., are just some of the thousands of examples that show the normals have lost.  If they are not standing up now, then it is not going to happen. Because this is as bad as it gets. Oh, it can get worse, but when you have reached Hell, and you have, it is just the level in question.

So the question is – does anyone see a way out? And if so what is it. Because there is nothing happening now that I can see. Please give me some hope. I sure could use it about now. I just do not see it.  This is the text of the original article, for reference:

"I am currently stateside. It has been a few years, and I had to take care of some business. My wife and I have revisited some of our favorite spots, and caught up with some family. We have driven through some of God’s finest works. There is no more beautiful landscape anywhere on earth than the west coast, Route 66, southern Colorado, the Badlands, etc.

That said, I say this most sincerely, and with great sorrow. Those of you who can, get out now.  What I have seen leads me to depression, and there is no road back for the US, in my opinion.  The blinkered people, the tax collectors roadside (police everywhere collecting taxes), the tax collecting at every opportunity, the welfare state, the severe drop in service at restaurants, the tattoos, the green hair, the lard-asses everywhere, the severe over-population of great swathes of the country, the hideous media out only to inflame, and not to report, the aged and infirm working at whatever jobs they can find, the homeless everywhere, the beggars, the filth roadside, the severe health issues seen at every turn (people everywhere too fat to walk, carrying oxygen, diabetes inflicted, toothless), casinos one after another, hideous roads, etc. ad naseum, lead me to but one conclusion: the US is f****d. It grieves me to say it. It disgusts me to see it.

Of all of these things, the most serious is the blinkered people. They have no insight, no curiosity, no sense of understanding of the world, no vision of anything outside their tiny bubble.   There are far too many people. California has 40 million, almost double that of Australia, which is more or less the size of the lower 48. I struggle to breathe around such masses.   I can feel the desperation wherever I go, but the people cannot see that they cause their own issues by living far beyond their means, with leased cars and pickups, and mortgaged to the hilt.   I spoke with many relying on pensions, who do not realize the precariousness of their positions. I ask how well funded are their plans, and they stare at me mouths agape, unable to even grasp the question.

I spoke to many business owners, who are so angry it defies belief. To a man, they are wanting to throw in the towel. Government has choked them to death, and dealing with employees is killing them day by day. One has seven lawsuits going, and has been sued 25 times. He services equipment for other companies. Whenever an idiot maims someone with the equipment he services, he gets roped into the lawsuit. The equipment never fails, but some idiot, not employed by him, runs over someone, and he gets sued, guilty by association.

The immigration policy of the US is helping destroy the country. As a reference point, Australia takes a couple hundred thousand immigrants a year, talent based. Talent based. Compare that to the US insanity.   On and on it goes.   So I say this. Get out if  you can. I recommend New Zealand or Australia. Others might recommend somewhere else. These countries have issues, but they are a few decades behind those that the US has. If not that, then if possible move away from the big cities."
- https://www.theburningplatform.com/
Posted by CoyotePrime at 8:52 PM